Puchong, 23 April: Excuse me for the question marks in the headline. For when it comes to the RSF, I shall remain a little bit cautious and a little bit skeptical. Still can't get over their Freedom Index 2013, when they ranked Brunei media as the free-est in the whole of Asean.

This is the second year running the RSF has ranked Malaysia above Indonesia, Thailand, the Philippines, Myanmar, Cambodia, Brunei, Singapore, Laos and Vietnam. How did our media do so well so suddenly after languishing near the bottom all these years?

"Press freedom is receiving breath of fresh air after PM Najib Razak's ruling coalition suffered a surprising defeat in the May 2019 (sic) general elections ..." Read on: 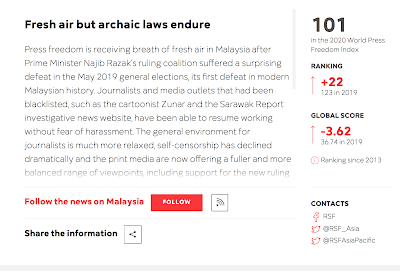 In its report, the RSF didn't get to take into account the sudden demise of the PH government by the PH's own making. When they include this in their report and rankings for 2021, we can expect Malaysia's freedom index to fall, too.

But will it matter as much if journalists in this country continue to lose jobs and face dismal prospects? Over the last two years, when our press was said to be the most free in the region, thousands of journalists and media workers were retrenched as newspapers closed down or new owners were brought in by the new government.  Hours before the RSF came out with its report, one of the biggest media barons in Malaysia closed down one of this two newspapers, resulting in all his contract staff, including seasoned journalists, to lose their jobs. Those who got to keep their jobs were 'encouraged' to take a pay-cut.

With Covid-19 likely to stick around and the economy expected to dip to unprecedented lows,  journalists, like everyone else, will be worrying more about putting food on the table as the media owners, especially the small ones, try to stay afloat for as long as they possibly can.