Holy cow, is this the Selangor we knew?

Updates, close to midnight:
Latest posting by A Voice, here, a MUST READ.

Bru says: There are pictures everywhere, so the cops have their work cut out nicely for them. 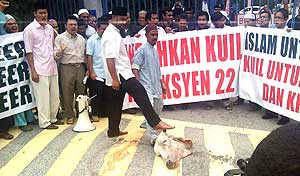 From the underworld and beer issues to non-Muslims-only consert to cow-head/Hindu temple protest. Reading the comment by Old Fart [ "so much hate, so much anger"] under my previous posting, I was struck by the odd significance of the Hindu temple vis-a-vis the state of politics in Selangor before and after Pakatan Rakyat came into power.

You'd probably remember, too, how Khir Toyo's pop ratings plunged over the issue temple demolition as the general election drew near last year. When KT's Barisan Nasional lost Selangor to Khalid Ibrahim's PR, we thought better times were ahead.
But no. The Hindu temple has returned to haunt the state government. This time it's not about the destruction of a temple but the construction of one!

The cow-head incident in Shah Alam yesterday happened during a protest staged by Muslim-Malay residents of Section 23. They were not happy with the Selangor exco's decision to relocate a temple to their area. The picture above tells the story [and read here about the significance of the cow in Hinduism].

The standard script: PR supporters blame BN/Umno or/and PM Najib Razak. I wonder there's going to be a "mysterious letter", with JAIS insignia, to say that the cow-head was the work of some pro-government religious officials. [Eg. Hindu Temple Protest by Racist Malays in Shah Alam] 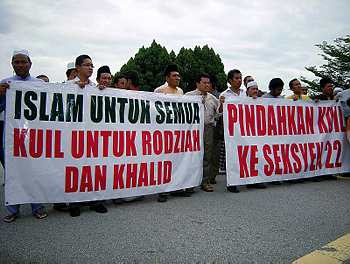 p.s. Khalid has issued a statement to condemn the cow-head provocation, but that's not going to solve anything. As he was part of Xavier's committee to discuss and approve the relocation of the temple, Khalid had a lot of time to convince the residents of S23 of why the temple should be relocated to their area and why they should not be so "religious intolerant" in the first place.