The Browns and Bridgets and their love-hate relationships with Malaysia

The modern white Rajahs. Just read New York Times' article on Ms Clare Rewcastle Brown, glorified and littered with factual errors, and wasn't really surprised to see another white chick, Ms Bridget Welsh, being quoted by the NYT writer. I had told you so - Welsh has begun to sell herself as an expert on Malaysian political affairs, which have officially included deforestration and greedy Malaysian elites. As I'd written h e r e, the number of people claiming to be experts on Malaysian politics is growing fast and some of them, like Welsh, are based in Singapore. 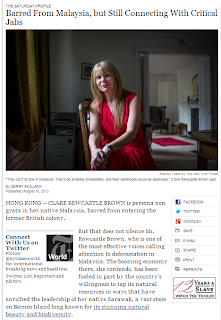 I am especially fascinated with Brown's "vivid memories of leaving North Borneo at 8" and remembering "vast canopy of rain forest", and how devastated that little girl would be to see "the destruction of the forest" when she returned to Sarawak ...40 years later!

Malaysian state, a popular tourist destination and the serene home to the oldest rain forests in the world and the flowers and fauna that come with the "vast canopy". She joins a list of Malaysians - predominantly Opposition leaders who harbor the hope to rule Sarawak themselves - who have been stopped from entering the state in the last year or so.

Malaysia has also barred foreigners from entering the country, including Australian politician Nick Xenaphone, who not only has been openly supporting the Opposision leader in Malaysia but who has been openly opposed to the Malaysian Government.

But as far as the US and Brown's own country the UK are concerned, denying undesirable elements entry into their borders isn't a bother at all, it's a hardly contested responsibility and right of the government of the day. The list of people banned from entering the UK  includes even elected leaders of sovereign nations! And believe it or now, Yusuf Islam aka Cats Stevens was barred from entering the US after 911 for some suspected terrorist links!

Singapore, where Welsh is happily based, has also barred foreigners and if Welsh thinks she can criticize Singapore half as freely she now enjoys criticizing Malaysia, she'd soon be shipped back from wherever she came from.

In 2012, Singapore even denied rescued boat people from Vietnam asylum in the republic! Guess who had to take in those poor souls? Why, Malaysia of course!