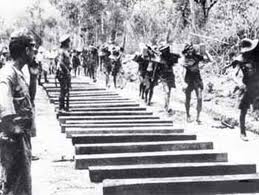 In Malaysia’s case, a separate agreement was reached in July 1967: a sum of M$25mil (Malaysian ringgit) was presented to be used to purchase two ocean-going vessels from Japan. There was, however, some wangling before the agreement was actually signed. The Japanese Government demanded that the Malaysian Government guarantee it would make no further demands. This was rejected by the Malaysian Government. It was not until September 1967 that the agreement was signed after Japan withdrew that demand. The two governments, however, did agree that the gift of M$25mil would be the final and complete settlement of the unpleasant events of the Japanese Occupation. Source Danny Wong Tze-Ken Department of History, Universiti Malaya.

Nizar's Death knell. Since losing his MB post, Nizar has struggled to remain politically relevant. We can understand that he wants to hit back at his political foes. But making use of victims of the Death Railway from the World War II era? It reminds me of Hindraf's trillion-dollar claim from Britain back in 2007, supposedly to compensate living Malaysian Indians whose ancestors were brought to this land, presumably by force, to work the colonial masters' estates. Nizar's RM207 billion is smaller than Hindraf's but his goals are as lofty: fan the sentiments of the Malays, who represent a considerably bigger voting base than the Indians, and try and score points against the Federal Government (note the reference to ETP below!):

As with Hindraf, we will soon learn of Nizar's only agenda here, ie his political survival. Wisma Putra will undoubtedly come out with an official statement but before they do, SatD rings Nizar's death knell in his latest posting Japanese WWII reparations: Are PR politicians on LSD?

SatD's articles are, as always, meticulous in his research so think before you leave comments h e r e.