Not your average Muslim country ..

"... (Malaysia) is the world’s most important Islamic-finance centre. Just over a fifth of the country’s banking system, by assets, is sharia-compliant; the average for Muslim countries is more like 12%, and often a lot less. Malaysia dominates the global market for sukuk, or Islamic bonds. The country issued the world’s first sovereign sukuk in 2002; in the first three quarters of 2012 it was responsible for almost three-quarters of total global issuance ..."

The prolific commenter Warrior 231 reminded me in his latest comment (just in case Anwar Ibrahim, the ex Finance Minister, plans to claim the credit, he said) that Dr Mahathir Mohamad was the Prime Minister  when the world's first sovereign sukuk was launched by Malaysia tercinta10 years ago. He provided me with this link to The Economist's latest take on us:

Banking on the ummah 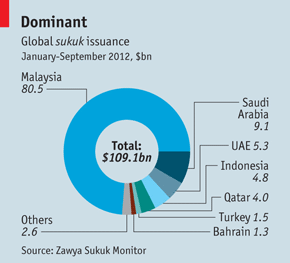 OF MALAYSIA’S claims to fame, leadership in financial services is not an obvious one. Yet in some ways the country is the world’s most important Islamic-finance centre. Just over a fifth of the country’s banking system, by assets, is sharia-compliant; the average for Muslim countries is more like 12%, and often a lot less. Malaysia dominates the global market for sukuk, or Islamic bonds. The country issued the world’s first sovereignsukuk in 2002; in the first three quarters of 2012 it was responsible for almost three-quarters of total global issuance (see chart). Malaysia is also home to the Islamic Financial Services Board, an international standard-setting body.
These are big achievements for a relatively small country of just 30m people, of whom only about 60% are Muslim. In neighbouring Indonesia, which is home to the largest Muslim population in the world, only about 4% of the financial sector is sharia-compliant. Although the much richer Gulf states and Saudi Arabia have bigger Islamic banks, it is Malaysia, argues Iqbal Khan of Dubai’s Fajr Capital investment fund, that is the centre “for thought leadership in Islamic finance”.
In this section

How did the country carve out this niche? Malaysia’s Muslim heritage, outward-looking nature and links with financial hubs like Britain and Singapore made the place a natural candidate to bridge the worlds of religion and capitalism. The central bank, the Bank Negara Malaysia, is also supportive.
Two institutions in particular, both set up by the central bank, have contributed to Malaysia’s pre-eminence in the field. The first is the International Centre for Education in Islamic Finance (INCEIF). Established in 2005 and boasting about 2,000 students, INCEIF is the world’s leading university for the study of Islamic finance. The International Sharia Research Academy, housed within INCEIF, brings together scholars to produce an internationally acceptable rule-book for Islamic finance.
The second institution is the Islamic Banking and Finance Institute of Malaysia (IBFIM). It concentrates on vocational training, offering a variety of certificates in Islamic finance. IBFIM also acts as a consultancy to banks and firms that want to become sharia-compliant.
Zeti Akhtar Aziz, the head of the central bank, says that these bodies are the “pipeline to provide the banks with talent”. And not just in Malaysia. There are currently students from 80 countries at INCEIF; and IBFIM has taught people from Afghanistan, Nigeria, Palestine and elsewhere.
All of which gives Malaysia greater status within the ummah, the global Islamic community, important to a country that often feels on the periphery of the Muslim world. There are more tangible benefits, too. The Islamic subsidiary of Maybank, a big local lender, already accounts for about half of the group’s customers and is expanding abroad: it set up a subsidiary in Singapore 18 months ago and has also moved into Indonesia.
Ms Zeti argues that sharia-compliant banks are inherently more stable than conventional peers. Speculation is forbidden, and because charging interest is prohibited under sharia law, returns are based on profit-sharing. Perhaps. Islamic finance is hardly foolproof: Dubai’s debt crisis in 2009 showed that sukuk can help to inflate debt to unsustainable levels. But whatever its pros and cons, Malaysia will provide much of the evidence either way.
at January 06, 2013