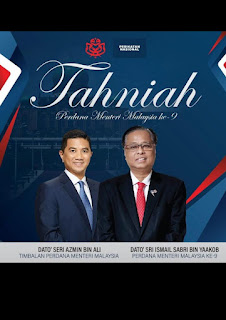 Puchong, 18 Aug: I know - like, even - some of the former Ministers from Tan Sri Muhyiddin Yassin's Cabinet.

Hishammuddin Hussein, for example, I consider an old friend, a motorcycling buddy with whom I've never ridden with. I've always liked Khairy Jamaluddin even if the feeling is not mutual: he's young and cocky but he was seen as working hard and trying to deliver the tasks given. I didn't like what Hamzah Zainuddin had become as Home Minister of the backdoor government but he had never not responded to my messages. Annuar Musa, if he had not breached the SOPs again and again, would have been my pick for Best Minister in the worst government we've ever had.

But if anyone of them were to be picked as Prime Minister to replace Muhyiddin, it would be same old, same old. Bad.

But it wouldn't be the worst case scenario.

The worst case scenario, in my mind, would be for Ismail Sabri, who was the outgoing Muhyiddin's last-minute choice to be his Deputy Prime Minister to 'buy' the support of Umno and save his own skin, is made our new PM.

And for Azmin Ali to the new DPM.

That would be totally unacceptable.

And yet that's the deal the Umno 'Derhaka' (the title given affectionately by Najib Razak to the party's faction led by Ismail Sabri) is said to be making with Muhyiddin's Bersatu, it seems.

If I were the King, I would want something better. This nation deserves better. The People have suffered enough.

If it's Ismail Sabri -Azmin Ali, we might as well bring Muhyiddin back!