From hero to zero: Not just about Muhyiddin but also the story of Malaysia under Muhyiddin

From hero to zero: Muhyiddin’s spectacular fall from grace 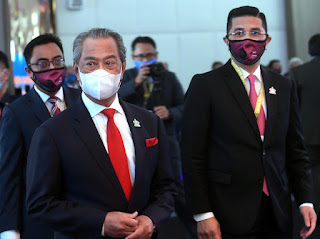 I'm not shedding a tear for Muhyiddin, though. Because the really sad news is this other hero-to-ZERO story of how the Malaysian economy has suffered due to the pandemic as well as the government's failure to handle it properly.

Hence, why picking the right PM comprising the right people in his/her Cabinet forming a new political landscape is crucial for our health as well as our wealth.

Fitch slashes Malaysia growth to 0% for 2021

In a commentary today, the research unit of the Fitch Group noted that the daily Covid-19 cases in the country have not come down despite the nationwide lockdown.

Fitch Solutions does not think Malaysia will achieve herd immunity before the end of 2021 despite the accelerating vaccine rollouts, thereby ruling out a potential economic surge at the later part of the year.

“All segments of the economy from an expenditure perspective except government consumption are likely to remain stagnant or even contract slightly from 2020 levels.

“We note further downside risks to our forecast given the high level of political risk since the beginning of 2H21 (second half of 2021) and the risk that the outbreak could still worsen over the coming months, which could further affect the economy’s performance,” added the research outfit.

Tan Sri Muhyiddin Yassin resigned as the prime minister today, with the Yang di-Pertuan Agong consenting to the Bersatu president staying on as caretaker prime minister until his successor is appointed.

While the expenditure components of GDP posted positive growth on a y-o-y basis, as it was coming from the low base set in 2Q20, Fitch Solutions opined that private consumption had in fact contracted 11.5% q-o-q, compared to the five-year 2Q average q-o-q growth rate of 2.4% pre-pandemic.

“This demonstrates the severe impact the third wave of infections has had on the key growth engine of the economy — private consumption accounts for around 70% of GDP,” it added.

Fitch Solutions is taking the view that the nationwide lockdown will likely last for the remainder of the year while localised lockdowns could potentially drag on into 2022.

Fitch Solutions also sees unemployment rising in 2H21 as it has already been increasing in the latest data available for June at 4.8% from 4.5% in May.

The gloomy view stems from the research outfit's opinion that it would be unlikely to achieve herd immunity before the year-end.

It also sees the risk that the vaccination drive could see a slowdown after this, as what has been observed in other countries such as the US and Singapore.

“Finally, the vaccination programme is being implemented by a mix of six vaccines, including Pfizer-BioNTech, AstraZeneca, Sinovac, Johnson & Johnson, Sputnik and CanSino Biologics, with only around 50% of doses ordered so far from Pfizer-BioNTech, raising risks around efficacy and the sustainability of any easing of lockdown measures later in the year,” it added.

Still, nine states in the country, which account for 37% of the country’s GDP, have moved into Phases 2 and 3 of the National Recovery Plan since July. There has also been relaxation in Phase 1 states where 11 economic sectors are now allowed to operate.

Along with Fitch Solutions’ dim outlook of the country’s economic prospects, it has also reduced its net export forecast. It now forecasts exports to grow by 16.1% and imports by 18.4%.

It reasoned that despite the Malaysian government opening up more industries, external demand will likely be more affected than previously expected given the severity of Covid-19 outbreaks happening in the region.

Besides that, while Fitch Solutions does not rule out more spending by the government in 2H21, it does not expect it to be material given that the total government debt has already exceeded its self-imposed debt limit of 60% of GDP.

“Even if, as we expect, the government raises the debt limit again, the contracting economy means that this limit will be calculated off a smaller base, reducing the fiscal space such a move would provide,” it said. - The Edge