Will we see PH-style 'execution' of GLC leaders?

Puchong, 8 March: One the first things that the ill-fated Pakatan Harapan government did in the short-lived Malaysia Baharu era was to unceremoniously sack government-linked companies (GLCs) chief executives as they were deemed to be allied to the BN government that had just lost to PH in the May 2018 general elections.

Marching orders for the likes of Abdul Wahid Omar and Shazalli Ramly and other gems who had been handpicked and groomed for years and years to lead and grow the GLCs.

Less than a handful from the BN-era GLC corporate leaders survived.

The PH government had then proceeded to put their own people to head the GLCs. Gelojoh. We heard of  tussles between the Minister of Finance and the Prime Minister's Office over some of the appointments involving  very strategic GLCs. In some cases, the new management and the government seemed to have colluded to accuse the old of mismanagement and abuse. Curiously, as in the case of Tabung Haji, none was ever charged, leading to suspicions of high-level hanky-panky involving some elements high up in the PH government. 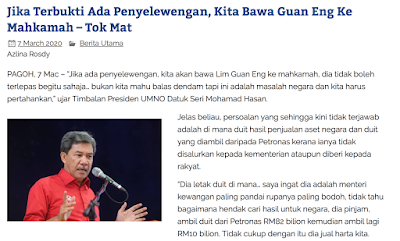 Agree with Tok Mat. If there were mismanagement and abuses, the Government should take those responsible to court, even if that person is the former Minister of Finance Lim Guan Eng. The Umno deputy president said it wasn't about revenge but ".. this concerns national integrity and we must defend it." (Read "... 15 national assets sold to foreigners during PH's reign. ")

But back to the GLC leaders who came in after May 2018. The likes of Zety Akhtar Aziz, Jalil Abdul Rasheed, Shireen Ann Zaharah and many more ... should they expect the same fate that had befallen their predecessors like Abdul Wahid Omar and Shazallii Ramly? 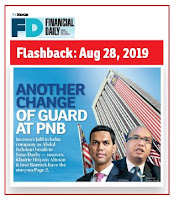 Should they offer to resign like Tommy Thomas and Latheefa Koya did or should they wait for the marching orders?

Whatever it is, I hope the new government would not do to the post-May 2018 GLC leaders what PH had done. If the Prime Minister wishes to replace all of the GLC CEOs, that is his prerogative to do so, but do it with due respect. What they did to AWO, Shazallii and the other GLC leaders after May 2018 - and how they did it -  was insulting, vengeful., jahat.

I'm sure you remember, the PH witch hunt did not stop with the GLC leaders. The PH government had frozen bank accounts of certain corporate leaders who were seen as close to the previous government and raided their offices.

One prominent businessman was paraded, for all and sundry to see, in and out of the courthouse like a criminal over deals allegedly made for the government when he was head of a tourism board.

Did you hear of that individual being charged with any crime or mismanagement afterwards? NO.

Why not? You tell me.