Updated Jan 3:
Told you our government wants to outdo the Singaporeans. Emboldened by its own courage, the Ministry of Health has vowed to widen the ban to include public laundrettes and hotels. The laundry owners are saying no need lah but like the eatery owners before them, the Ministry is expected to turn down their invitation to discuss the matter like grown-ups and implement the ban unilaterally. 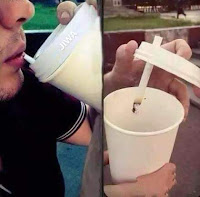 Can't help it, but the smoking ban at all restaurants including open-air eateries reminds me of Singapore's chewing gum ban. For you kiddies out there, the infamous gum ban was imposed by the government on its citizens in 1992 and lasted more than 10 years. I'm not sure if anyone was actually fined $100,000 or jailed two years, the maximum possible penalties for the offence, but an American and two Germans were sentenced to a number of strokes of the rotan by the Singapore court for vandalism in 1994 and 2015, respectively. For these and other kiasuness (try 16 Odd Things That Are Illegal in Singapore), we were able to poke fun at the Singaporeans, But the way our government's pushing for this latest and supposedly very crucial no-smoking rule, I feel that we are about to outdo our neighbours.

My quarrel with this new ruling is simple: smokers and non-smokers at Malaysian restaurants have co-existed peacefully for a long time. Everyone understood that air-con meant strictly no smoking. If you wanted to smoke, go sit outside under the kipas (if there is an "outside" because many restaurants are fully air-conditioned). I wrote in FB h e r e "if the minister really sincerely wants to make this country cigarette-free, BAN cigarettes (and vape, e-fags, Iqos, etc) and forsake the over RM1 billion the government collects yearly in smoking taxes".

Otherwise, this is just another exercise of hypocrisy at the expense of not just the smokers but also the eatery owners, who are mostly small business people.

I just don't think the latest ban is going to deter people from smoking by much, it at all.
at January 02, 2019