Fireman Adib is dead; I hope they all hang 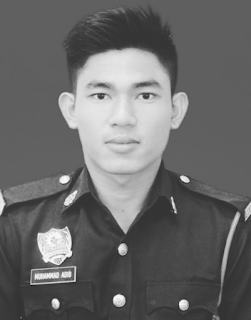 Alfatehah, Adib Bomba. Nowhere in the world has a fireman been beaten to death for doing his job, for trying to help. Only in Malaysia.

For you, adik Adib, I hope for Jannah.
I hope Waythamoorthy does the right thing and die. Everyone else involved in the murder should hang. Bastards.

And they should close the temple, voluntarily.

Totally agree with you bro!

No prison for the murderers!

Let's start a petition to seek the death penalty for those vicious murderers!

the strongest words from you Rocky, ever You echoed the sentiment on the grounds. TDM please step down. Warthamurthy please hang yourself if the 4 murderers are not hang.

It has been a while since I agreed with you. The bastards should be immediately be re-arrested. What BS the DPM is talking, it was a hate crime due to religion and race committed by the bastards. If the fireman was a hindu/indian he would not have been assaulted.

The worst that had been feared has happened.

Al-Fatihah to Mohammad Adib. He is only 24. He got a great life ahead should those dirty murderers hand not touch him.

Now, the plot thickens. Let's see how those bastards wiggle their way out! Spin the stories.

In this instance, I agree with you, Rocky. They should close the temple. A soul has been taken. Though I am a Hindu, I totally agree with you on that.

Wahhh latuk sejak you started mentioning 'Jannah'? You seems so upset that wanted to
hang those responsible? You forgot about rule of law?

Perhaps you trying to stir the malays raw emotions so that the racial war escalate to becoming worst, is it?

Sorry arr latuk, words coming from 'pemakan dedak' like you is worthless!!!

Ah, guess there are still a few scraps of dedak to be made, huh.

And you're doing the predictable racial shit-stirring, how original! No wonder you led your paymasters to such a resounding victory in PRU14, kan? You media czars are worth every sen!

Anyway, just to be accurate, the worst incident of Indian-on-Malay violence was actually the RM5 million in damages that Tony Fernandes smacked your second-fattest macai (the bankrupt one) with in that Air Asia libel case.

You need to keep up your charity to failed journalists, young exploited cub reporters, illiterate has-beens, and gender confused mak nyah male bloggers who pretend to be female.