"It wasn't a Malay or Chinese tsunami, it was the Tunami ... if BN ever want to know what hit them." - A former NST sports editor 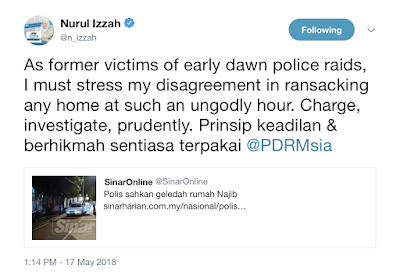 It's already a week after Pakatan Harapan won the 14th general election but, as pointed out by the blogger Big Dog while the cops were raiding ex-PM Najib Razak's family home in Kuala Lumpur yesterday until the wee hours of Ramadan (hence, Nurul Izzah's tweet), Malaysia was practically still under a one-man Government. After that posting, Dr Mahathir Mohamad made himself Education Minister and gave his deputy a portfolio but it won't be until next Monday, at the earliest, that we'd have a Cabinet.

The move to zero-rate the GST, effective June 1, has appeased many. People aren't celebrating just as yet, though. Because they don't know if the new SST will actually reduce their cost of living, a major theme in the general election. Plus, it may take longer than 100 days to instal a new tax regime, said former Bank Negara government Zeti, who is one of the members of the Council of Elders helping out Mahathir's government. But it is a good start, nonetheless.

In the meantime, Mahathir said he was Not aware raid on Najib's house done at night. Deja vu?

Selamat berbuka puasa to all my Muslim readers.