Probably the last man Dr M would want to mess with


"(Mahathir) has forgotten many things he has done." - Sultan of Johor

Puchong, 16 Jan:
At his height of political power, Dr Mahathir Mohamad almost beat the Raja2 Melayu to a pulp. Using a battery incident involving a member of the Johor Royaly as an excuse, he took on the entire Royal institution and, aided by two of his biggest allies in Utusan Malaysia and New Straits Times, brought the institution to its knees during the 1990s - and his own prowess to a dizzying peak. Tuanku Ibrahim Iskandar was in his 30s then, not even heir apparent to the Johor throne yet, but his dislike for Mahathir was well known to those close to him then as it is now. Over the weekend, he openly displayed his disgust with the former Prime Minister yet again, albeit ever so politely and regal: 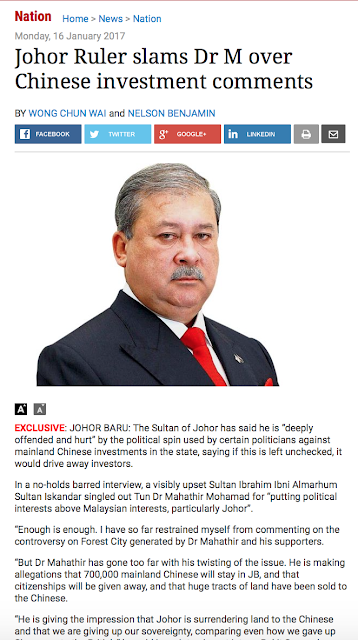 “During his te­­n­­ure as prime minis­ter, he was asking Malaysians to Look East but now he is critici­sing when Chinese investors come here to invest.” - Sultan Ibrahim

Read the story in the Star h e r e.

Make no mistake: Dr M is not down or out; on the contrary, he's at the height of his post-premiership political power. He's set up a new political party and seems to have the opposing parties in the Opposition in his pockets.

But up against a Sultan who has the whole Bangsa Johor behind him, Tuanku Ibrahim may be the last man Dr M would want to mess with right now. I do hope the Tun's advisors can tell him that it would be wise not to rile the Sultan further.

Might even be a good idea to do another U-turn ...