Sentiments, national pride must not get in the way of business decisions: Salleh, The Malaysian Digest Jan 10

Puchong, Jan 11: I was asked by a young reporter from The Malaysian Digest yesterday what I thought of Salleh Said Keruak's Jan 9 posting This is called Globalisation. Though the Communications Minister did not make any reference to anyone on the posting, I thought it was clear that he was happily jabbing at Dr Mahathir Mohamad who insisted in a Jan 6 posting that Prime Minister Najib Razak and Johor were selling out to China.

The Tun used to use Singapore as a boogeyman to piss us off or of scare us off or to divert the nation's attention. China is officially his new (and bigger) boogeyman.

Unfortunately, it is also another complete U-turn by the Old Man. His first for 2017. 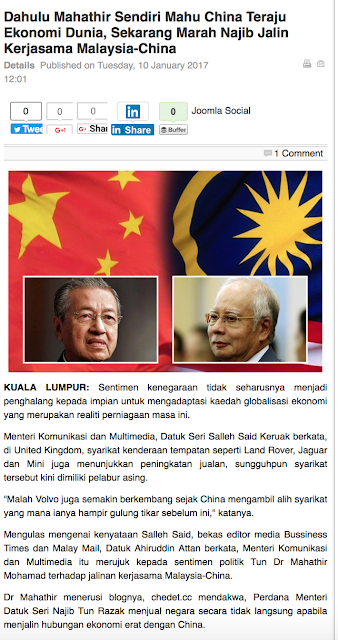 Salleh, in his posting, cited the irony of the British auto industry which enjoyed a record year last year but only after the Mini, the Land Rover and the Jaguar - all proudly British - have been sold to foreigners. Even Volvo is doing better since the Chinese took over the company whereas it was on the verge of closing down earlier, the Minister wrote.

Mahathir knows what Salleh is talking about and for that reason I think he's going to let Salleh go this time. The Old Man did (or tired to do) a China long before the Chinese: he bought Italian pride MV Agusta and Britain's Lotus in the good old days of his premiership.

Sadly, we weren't as successful as the Chinese, though ...