AsH called from Leicester, enquiring as to why I hadn't been blogging as regularly of late, if I was alright or been struck by brain damage after growing yet another year older. "Tired, Miss Hamid," I told my former teacher. Oh, I sounded like Annie of the Life of Annie fame, I thought, but the truth is everyone who hasn't gone mad ought to be tired of the politics that have dogged the nation and bogged all of us down for the whole of 2015. The message from the Sultan Johor - for the nation to be fair to Najib Razak as they have been with previous Prime Ministers - is, therefore, refreshing for a change. Just what the nation's tired soul and spirit need. Or, rather, just what a tired older blogger needs to put up another posting.

Tomorrow or next year the Sultan will say something I may totally disagree with, but that's for another day. For now, I am interested in the response of only one man - Dr Mahathir Mohamad - to the Sultan's call. 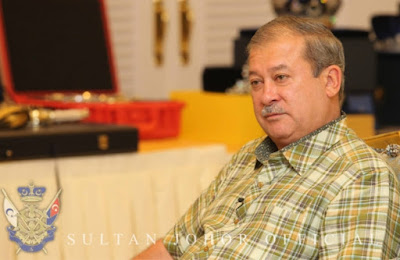 He said although the prime minister has come under criticism, it was time that the nation “move on”, although he also stressed that there are still issues that the Najib administration must address and explain.

“The year has come to an end, and we must move on… there are issues that still need to be tackled, that need to convince the people, that need answers, but I must say they also need closure,” the Sultan said in an interview with the Sunday Star.

He also dismissed claims that he was not in favour of Najib, saying that as the Johor Sultan, he does not favour anyone as it was his duty to stay out of politics.

Claims that the Johor royal house was unhappy with Putrajaya emerged after Najib dismissed his deputy, former Johor mentri besar Tan Sri Muhyiddin Yassin, from the Cabinet in July.

The two fell out purportedly over the former’s handling of the 1 Malaysia Development Bhd.

The Johor ruler revealed that Muhyiddin did express his unhappiness when the two met following the latter’s dismissal, but said the meeting was not in anyway political.

“I listen and keep it to myself. I have also met up with the prime minister and avoid speaking to him about politics.

“Let the politician handle politics. I am above politics,” he said.