Common sense prevails in TH's TRX parcel. Just read the good news that, in effect, implies that Tabung Haji would not be selling off the TRX parcel that it bought from 1MDB, after all. The pilgrims fund had been accused of having bought the property to bail out 1MDB, which was totally bollocks as everyone knew that the deal was a sweet one for Tabung Haji. Nevertheless, the management and the board were pressured to sell it off to avoid yet another controversy for PM Najib Razak.

Well, if Tabung Haji had gone ahead and sold the parcel back in May, it would have been really stupid and it won't be me calling them stupid but the very people who claimed the deal was a bail out!

Gotta thank the guys at the Malay Mail Online and the Malaysiakini for the good news. And Big Dog for not missing it. Read his latest posting A Sound Decision.

You can read the MMO's article yesterday (29/12) LTH's land in TRX too profitable to sell. 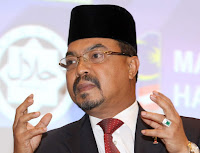 KUALA LUMPUR, Dec 29 — It would be unwise for Lembaga Tabung Haji (LTH) to sell off its plot of land in the Tun Razak Exchange (TRX) as it is a great investment with promising returns, Minister in the Prime Minister’s Department Datuk Seri Jamil Khir Baharom said.

According to Malaysiakini, the minister said this in a parliamentary reply on December 3 when explaining the delay behind the fund’s plan in May to sell the 1.56-acre plot.

"The land at TRX has high value in terms of integrated development, strategic location and return on investments," Jamil Khir was quoted saying in the reply to PAS's Temerloh MP Nasrudin Hassan.

The minister, citing news reports, also said that LTH had purchased the plot for RM2,773 per square foot (psf) when other buyers paid between RM3,000psf and RM4,500psf.
He added that the purchase is expected to rake in an estimated profit of about RM177.5 million.

Nasrudin had reportedly asked Putrajaya to explain why LTH had delayed selling the TRX land.

LTH had purchased the land from 1Malaysia Development Berhad (1MDB) for RM188.5 million in April but was subjected to much scrutiny from various parties for allegedly using public funds to bail out the state investor.

The pilgrimage fund made a decision to immediately sell off the land soon after but Prime Minister Datuk Seri Najib Razak insisted in August that LTH was making a mistake by doing so.