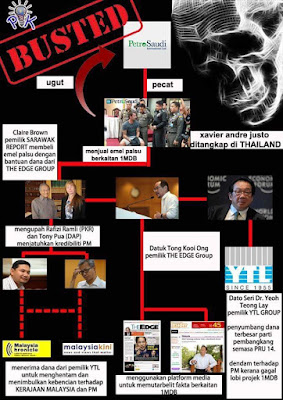 RPK says it, the plot thickens and goalposts change all the time that even his seasoned operative mind is a little muddled, exhausted by the intrigues of parties using the 1MDB to try and bring down Najib Razak. Read  A new dimension to the 1MDB controversies  to understand how thick they (plot and plotters) have grown.

Now, you and I know RPK. You give him half a truth and he use that to hypnotise the masses with a series of plausible theories that may take years to snap out of. He's who Clare of the Sarawak Report should have as an ally if she wants to save her reputation. But RPK does seem to have something on Sufi Yusof, Dr M's loyal aide, or at least he believes he does. Now I know Sufi - in fact, longer than I know RPK - from when he was a cadet reporter back in the early 90s until the time he briefly served Najib Razak as the National Comms Team head.

Sufi may have met Justo but Sufi wouldn't have misled the Tun, not in a thousand years. (Doubt Sufi met Justo by A Voice, 26/6)


p.s. As for the poster above, it's the kiind of plausible theory that's gone viral, h e r e and t h e r e. The Sarawak Report is reeling so I expect The Edge and Tong Kooi Ong to come out with everything they've got. I expect threats, I expect lawsuits. Credibility and integrity are on the line.

In a related development:

1MDB repeats our commitment, as announced on 25 May 2015, to attend the PAC hearings.

It is clear that the speculation today by both individuals is to divert attention from the recent heavy criticism of YB Tony Pua, a member of the PAC, for his many statements that may be seen as prejudging 1MDB although the PAC process has yet to be completed.

1MDB has every confidence in the PAC process and trust that the honorable members will carry out their role in a fair and professional manner.

We hereby reconfirm our attendance and commitment to fully cooperate with the PAC.