Or dumb and dumber. Pardon my language, this being the holy Ramadan especially. But reallly, I don't know whether to cry or laugh at some of the opponents of the 1MDB/Prime Minister. The latest being their antics over the Kampung Baru mosque. I mean, if you are going to be a rebel, at least be a smart rebel. Don't we have enough morons already?!


To see their absurdity, first please read what The Malaysian Insider reported on 5 Feb 2011 [note the year, please, that's more than 4 years ago]:

A bit of background: Kg Baru, a Malay reservation within KL, has always been a tug-o-war between the BN government and the Opposition. In 2011, with the general election looming, it became even so. Kg Baru falls under the Titiwangsa parliamentary seat which was won by Pakatan in the 2008 general election. In the 2013 GE, BN led by Najib wrested the hotly contested constituency from Pakatan. Now you may or may not wish to credit Najib for this victory but it did happen under his watch and the Kg Baru redevelopment plan may have something to do with it. 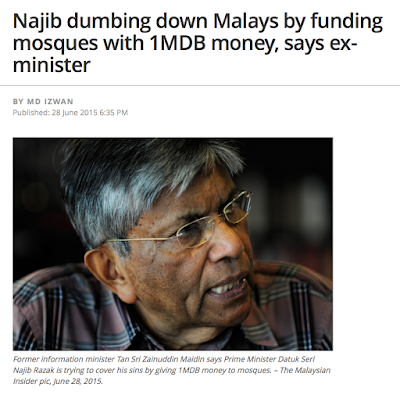 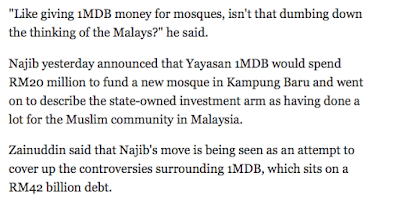 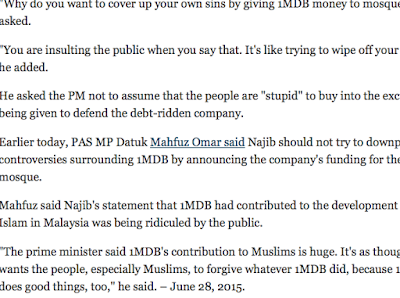 See what I mean? PM Najib had announced the Kg Baru mosque plan in 2011, even before Mahfuz's ex-comrade DAP's YB Tony Pua started making 1MDB his personal and political punching bag, and way, way before the mantle was passed to Tun Dr Mahathir and Zam.