Malaysia, where a different kind of "Apartheid" still exists

Mandela, Mahathir, Haniff, AsH, and the Malaysian Insider. In his latest column in the NST, Shamsul Akmar reminds Malaysians of how Nelson Mandela had sought Dr Mahathir Mohamad's views on implementing the affirmative action ala NEP to help end Apartheid policies in South Africa. And in continuing where Tun Haniff Omar and the blogger Anak Si-Hamid had left off, Shamsul bashes up the editors at The Malaysian Insider:


"Probably the remarks by the former IGP had stung so much that in its eagerness to mock and debunk Hanif, the Malaysian Insider, when getting on its high horse, forgot about the number of apologies that it had to dish out for gross misreporting, if not outright lies. By any standards, the number of apologies from it in its few years of existence makes the traditional media, which had existed for decades, look like novices in the misreporting department."


If davidlee52 is calling Malaysia an Apartheid country, where one dominant non-indigenous group, the Chinese (like the whites in South Africa), control and  hold the reins of wealth  -  then there is Apartheid in Malaysia! - Anak Si-Hamid in Perfidy (Dec 8)

In fact, Anak Si-Hamid writes, going by this twisted definition of Apartheid, there would be two other countries in Southeast Asia - Indonesia and the Philippines - where one dominant non-indigenous group control most of the wealth. AsH was responding to a comment left by "an ex-Malaysian Chinese living in England for most part of his life, davidlee52 of Swanscombe, who was first to leave a comment under the UK Daily Mail article Nelson Mandela is dead at 95.

This is not the first time some idiot accuses Malaysia of Apartheid. I have refused to publish such comments on my blog for sometime now because they are just so ...idiotic. It's a shame that these commenters, like davidless52, could find a new home in the online pages of the British media.

When Mandela was behind bars and most needed help, much of the world was mute. Dick Cheney even voted against a 1986 House Resolution calling on South Africa to release Mandela. 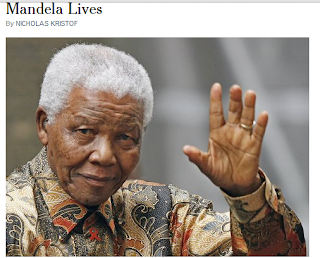