The return of Wawa

Ah, did we know that the former Bank Islam chief economist Azrul Azwar Tajudin or better known as Wawa is now the head of Institut Rakyat, one of Anwar Ibrahim PKR's think-tanks? Now you know.

Don't remember Wawa? Quick refresher's: Wawa was the dude who went to a regional forum in Singapore in Jan and predicted that Pakatan Rakyat would form the new government after PRU13. Wawa was very specific, saying BN would win a maximum 107 of the 222 parliamentary seats and would even end up with as few as only 97! (BN won 133 and wrested back two States from Pakatan in the May general election and went on to form the government again).

Now you remember Wawa? Wah wah, he's back in the political limelight, this time minus all the pretenses and at least the Pakatan folks won't have to deny knowing him. Read the Mole's report Rafizi still important to PKR and the blogger Gelagat Anwar. 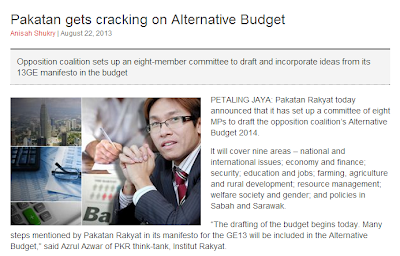 So, no wonder he was saying what he was saying back in January. If Pakatan had won the GE, this guy would be the head honcho of PEMANDU or the Economic Planning Unit now. Twist of fate. I wonder what happened to the disciplinary hearing on his case. Bank Islam also lodged two police reports h e r e and h e r e against Wawa in Jan. I know the police reports were not withdrawn by the bank, so what happened with/to the investigation into the alleged misdeeds?