AES: Get on with it please

Updated: Latest talk is that the Cabinet has decided to allow the police to man the AES system/ Jolly well. But the question thousands of motorists are asking now is not whether the police is up to it or not but ... Do I have to settle the AES summons? I don't know the answer but I do have a question: Why should they pay if the Government now realizes the AES should not have been run by the two companies? I am reminded of what the ex AG told the current AG: Drop AES summonses, refund fines. 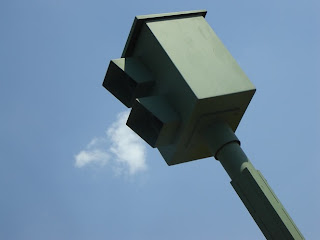 In the end (and the end is near), the two companies behind the Automated Enforcement System (AES) gained a most unlikely ally in the form of the people who run the Edge. In its latest editorial Takeover not the solution over the weekend, the influential financial weekly finally admits that "the AES system is good as it would deter speeding on the roads". It says it is "baffling" that the government is considering taking over the facilities set up by two private companies to implement the AES.

"Wouldn't it be more logical for the ministry to negotiate with them and change the contract terms? In return, the two companies can get to maintain the system for the next five years?" the Edge asks.

Unlike the Edge, I have been supporting the AES from the very start. Maybe because I'm a law-abiding motorist myself and I can't stand people  - especially motorcyclists - who do not respect the traffic lights. My logic is simple: I don't break the speed limit and I stop when it's red, there is no reason for me to oppose a "good system" like the AES.

But if Hisham, the acting Transport Minister, thinks that the Government had made a mistake and it must take over from the two companies in order to make it right, then get on with it. Admit the mistake, compensate the companies, pay the refunds, forgive the offenders, educate the motorists, equip your authorities, and just do it. And once the good system is up and running, for heaven's sake defend that system - and your decision. Just remember that no matter how good the system is or how right you are, there will still be Opposition.