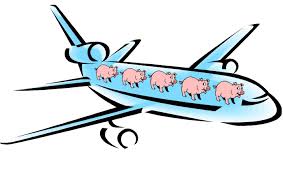 The spat between a subsidiary of Air Asia and the influential Malay daily Utusan Malaysia is far from dead; in fact, it recently escalated to a verbal exchange in public between two prominent Dins: Air Asia deputy group chief exec director Kamarudin Meranun and former editor-in-chief of Utusan Malaysia group Zainudin Maidin or Zam.

Like Din Meranun, I wasn't aware that Air Asia or AAX had filed a lawsuit against Zam the blogger-journo for his writing  reproducing the article Hidangan babi dalam penerbangan Air Asia (Pork menu on baord Air Asia) in May this year. Unbecoming as the lawsuit is, though, it has become a norm these days where big corporations, including political parties, resort to financially-crippling court actions to silence their critics, especially journalists.

As always, when a fellow blogger gets into trouble, we extend a hand to Zam in the spirit of solidarity. There was a time when we bloggers stood against Zam when he was the Information Minister but this occasion calls for a different kind of response.

Read Zam's promise to repeat his "for years to come" apology so that people will know of the circumstances that had led to the pork-on-flight issue. 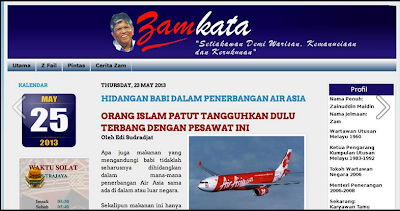 For a background on the spat that has divided Malays in the country further, read Air Asia X won't pull out ads from Utusan, says Rafidah.