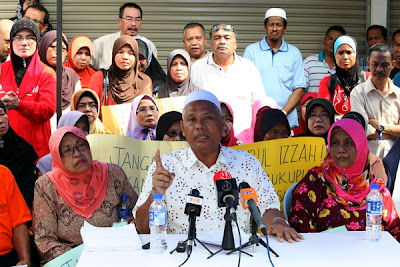 "We have been voting here before she was born." Nurul Izzah d/o Anwar Ibrahim may have dug a big hole for herself. On March 22, she directed her lawyer Edmund Bon to file a judicial review, demanding the Election Commission to nullify the registration of 4,637 or seven per cent out of 72,533 voters in Lembah Pantai parliamentary seat, which she is defending for the first time.

About 50 people whose names are on the list called for a press conference yesterday. They were, needless to say, pissed off with their MP for making them out to be "phantom" voters.

Tong Gaik Hooi, 56, a resident in Taman Seri Sentosa said he is not afraid to show his proof that he is a legitimate voter on polling day on May 5th. "I don't know if it is a political tactic by her to go against BN, but I will just do my duty as a citizen."

The Mole has the story h e r e.