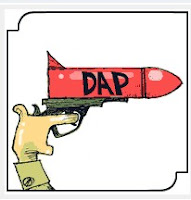 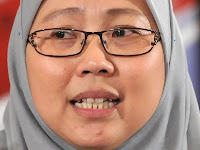 Pakatan "big brother" stays away from P083. PKR Fuziah Salleh's bid to defend her Kuantan parliamentary seat in the 13th General Election faces a major snag when DAP taikors ordered their supporters not to campaign for her. "Vote anything - vote a dog also can - but not her".

Why so angry, koko?  I was told by Fuziah's own supporters that DAP had expected to be given at least 1 state seat (Teruntum) and was pissed off big time when the seats went to PKR and PAS.At nominations for Fuziah's parliamentary seat and the 3 Kuantan DUNs yesterday, DAP supporters, flags, buntings were nowhere to be seen (inspect pic, right).

There are 18,227 Chinese voters in Kuantan, or about a third of the total number of voters. In 2008, Fuziah beat MCA's Fu Ah Kiow with a mere 1,826 majority. Her challenger on 5/5/13 is a 42-year old Kuantan born-and-raised chap the aunties and uncles in town and the villages have nicknamed "Suffian ni hau".

You can find out a little about Fuziah's challenger at Annie's h e r e. More about him from me later.