The morning after PRU12, as soon as he'd called for Pak Lah to step down in the light of BN's heavy losses at the polls, Dr Mahathir Mohamad remarked, cheekily, "Someone said we should thank bloggers ... I don't know for what." (Dr M: Thank you bloggers, Rocky's Bru, 9/3/2008).

For sure, the Malaysian bloggers had a hand in the outcome of the 12th general election. How influential we were back then is arguable but no one can dispute that we were a force to be reckoned with. Some may have forgotten the fact that our socio-political blogging could be hazardous to your well being: bloggers were sued, charged with sedition, handcuffed and locked up, shadowed and tailed, our offices/shops and homes were raided (or broken into), computers and laptops seized, interrogated/interviewed, sacked and then denied employment, etc. And blogosphere was so lop-sided - bloggers were either anti-BN or anti-Pak Lah. The BN under Abdullah Badawi shunned blogs and looked down on bloggers, and because of that none of their politicians dared to start a blog. On the other hand, almost everyone in DAP, PKR and PAS had a blog. In the run-up to PRU12, they had the field all to themselves, by stupid default.

After the PRU12, BN politicians jumped on the online bandwagon in earnest. The social media was catching on and many started Facebook accounts and later joined Twitter and Instagram. When Najib became Prime Minister, the pace started to quicken. Najib himself led the transformation of the cyberclueless BN politicians from anti-bloggers to cyber-savvy/friendly. His own Facebook became a phenomenon and is nearing 1.4 million "Likes". His Twitter account has over 1.3 million "followers". 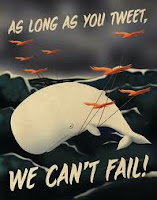 I remember predicting at a social media seminar at University Malaya soon after the PRU12 that a huge "army" of bloggers, cyber troopers and social media activists from the BN would be trained, armed and ready to do battle with Pakatan's seasoned warriors come PRU13. If the contest had been lopsided during the last election, the coming one will be more balanced. In fact, I think the Barisan politicians have caught up pretty well and may even have surpassed their rivals from Pakatan in this department.

It will be bloody and gory, and there will be tonnes of lies and filth flying around on the Internet. But remember the beauty of all this: the Intenet and social media are ALSO the best and quickest mean to correct the cyber lies and guide the lost souls. For sure, those who shun the social media altogether will fall on the wayside this time, like many of them who shunned the bloggers fell on the wayside in the last general election.
at March 01, 2013