A manifesto and Hindraf

Hindraf isn't the only one disappointed with Pakatan Rakyat's manifesto. I was amazed at how boring and un-original it is, and I have a feeling that many in Pakatan are bothered by the manifesto's failure to make an impact with the rakyat and there are suggestions that the team that came up with the manifesto was merely reproducing BN's best and most popular policies with added costs and open bribes.

And not to mention those amateurish, embarrassing, OMG-type "errors"  (Oil royalty blooper blamed on typo).

I spoke to a couple of economists the other day who said they spotted right away more than a few holes and inconsistencies in the numbers, too.

But if these failed to bother Anwar and Co, Hindraf's "deep and distressing" displeasure should. Hindraf's rise contributed immensely to Pakatan's cause against the Abdullah Badawi regime back in 2007 and 2008 right up to the detention of its leaders including Uthayakumar under the ISA, the self-exiled of Wathamoorty,and the banning of the organisation itself. After the better-than-expected results of the 12th General Election in March 2008, however, the Indians - in general and those represented by Hindraf - started to feel isolated, abandoned and even betrayed.

P. Waythamoorty: "Pakatan Rakyat has chosen to completely ignore the needs and interests of the Indian community in the country in its election pledges."

Anwar Ibrahim:  "Pakatan Rakyat's manifesto transcends racial groups as well as various subgroups including the Indian community, which is not neglected".

Waythamoorty: "If this was the case then how does he justify the specific pledges to the Malays, Chinese, Orang Asals, Sabah and Sarawakians, the ex-Armed forces and Felda settlers in the manifesto? The provisions there do not seem to transcend racial groups and subgroups. Enoug has been said of Pakatan moving away from racial politics ... They have been using this once too often as a cover to ignore the problems of the Indian poor and marginalized."

If Waythamoorty thinks Pakatan will drop everything and entertain Hindraf like it did in 2008, I wish him luck. I alerted the PKR man R Sri Sanjeevan, after his tweet praising the Pakatan manifestor sky high, that Hindraf wasn't happy with the manifesto. He had the same transcends-all-races reply: 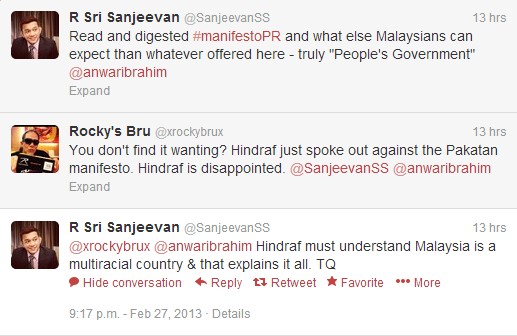