Beaten to a pulp by MCA's Psy-war. Lim Guan Eng, the Penang Chief Minister and DAP sec-gen, was fuming when he heard that Psy was coming to Penang to perform at bitter rivals MCA-BN's Chinese New Year concert!

Even close aides didn't expect him to throw tantrums and asked those who plan to attend the concert on Feb 11 to wear red (in support of DAP), yellow (in support of Bersih) and green (for the environment and against Lynas). Pathetic but also understandable. Guan Eng had thought that Tony Pua's video ala Psy's Gangnam Style, the one that makes fun of BN and reportedly cost a bit of money to make, was a gem. Now that Psy himself is coming to Penang, that video would be as good as his week-old pang sai!

Why didn't someone in DAP think of inviting Psy himself to come here? Niamah foo lat!

Still smarting, Guan Eng has since done the slightly smarter thing, ie let the party's machais or lackeys/cybertroopers put pressure on Psy via the Facebook not to come to Malaysia for the pop star would only be allowing himself to be a political tool of the BN. Teruk, puak2 ni but that's what cybertroopers are paid to do.

Latest damage control: Guan Eng lauds the BN for bringing Psy as this would bring in tourists, all the way from Thailand and Indonesia.

But wait, he has repeated his call for people to wear red, yellow and green to Psy's concert. Guan Eng does not realize that he's losing a lot of points here. He even gets a rare ticking off in the Malaysian Insider. Read Jansen Chia's  Psy and the Politics of Colour. 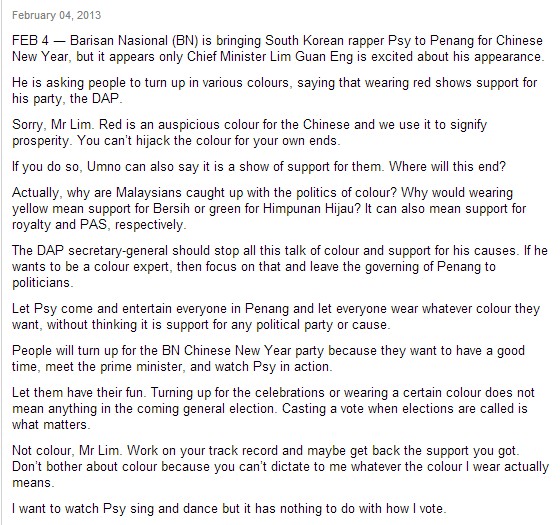