Australian Senate says NO to Ambiga and Nick X

updated: Ambiga's chauffeur-driven and lives in a million-ringgit pad? Barking Magpie's problem with ingrates in Ambiga told by Australia, Malaysia is fair country for everyone


I understand the Malaysian government has argued that the last election must have been fair—it lost its two-thirds majority in the parliament. - Bob Car, Australian Foreign Minister, when answering questions in Parliament last week from Nick X, a friend of Anwar Ibrahim


Original posting:
The following transcript between Bob Carr, the Australian Foreign Minister, and Nick Xenophon is not something Ambiga S would want you to know. The Pakatan poster girl was in Australia recently to plead the Opposition's case that election in Malaysia isn't bersih, but the official response from Down Under was a total letdown for her.

You can't blame the Aussie government, though. By any standard, the election in Malaysia has been bersih. I would add that the two-thirds majority wasn't the only thing it lost: it also lost control in five of the states, something which was unprecedented in Malaysian electoral history. As a result of the election, the Prime Minister lost his premiership!

In last Thursday's senate debate, Nick X made a rather pathetic attempt ("The tear gas was real, Minister Carr ... ") on behalf of the Opposition in Malaysia to pressure Canberra to intervene in Malaysia's domestic affairs.


"Whether we send observers to a Malaysian election would be a matter for the Malaysian government. We would not have any way of initiating such a proposal; we would respond to a request from them for election observers. I understand that the Malaysian Election Commission itself may be seriously considering inviting international observers to monitor the election..." 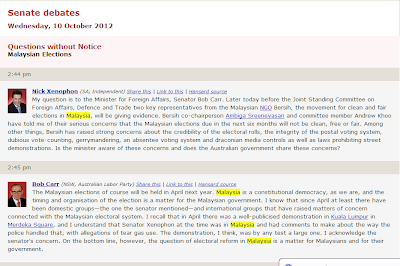 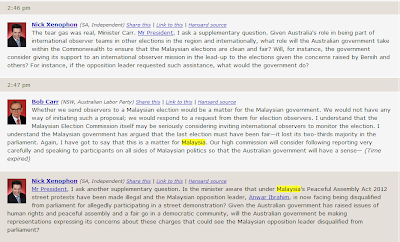 p.s. Ambiga has cried "harassment" against Bersih leaders because she was "briefly stopped" by our Immigration on her way to see Nick X in Australia. Read Malaysians Must Know the Truth's Now Immigration stops Ambiga at airport.
Hehe .. briefly stop pun tak boleh? Next time the authorities - police, Immigration Department, customs, etc - briefly stop me, I can cry harassment?
at October 14, 2012