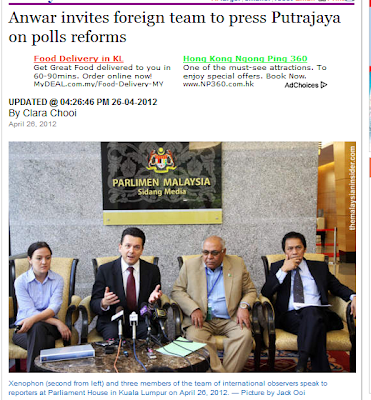 But despite being invited by the office of Parliament's Opposition Leader Anwar, the group's members insisted today on their independence, even claiming that their expenses for the mission are being borne by themselves or their respective governments.

"We were invited by the leader of the opposition (Anwar), but the invitation could have come from anyone because there are important principles here and we know that these are concerns that have been raised.

"We will be providing a report, all of us here on the panel, we are fiercely independent and we want to provide a report that is fair, based on facts and balanced... but the whole concept has to be one that we come here as great friends of Malaysia, of Malaysian democracy," said Nicholas Xenophon, an independent Senator for South Australia, during a press conference in Parliament this afternoon. - The Malaysian Insider, read full story

Independent? Hahahaha. Bo Lancao (to borrow pro-Bersih chant, here). This Nicholas Xenophon is the same one who's openly supported Anwar Ibrahim in the past (see the screenshots I've independently chosen to show he's a faithful follower of DSAI).

Don't know about the others on the team, but I think Nick Xenophon is here to gaily do what Anwar Ibrahim tells him to. But you, Dear Readers, judge for yourselves lah, OK?