AES 101 for some MPs (Morons in Parliament) 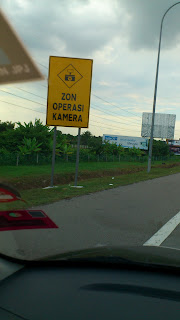 Original posting:-
AES burdens the traffic offenders, mo, NOT us taxpayers! Unlikely as it may seem, Mohamad "Hang Ambiga" Aziz, the BN MP for Sri Gading, shares one thing in common with Lim Guan Eng s/o Lim Kit Siang: both MPs want the Automated Enforcement Sytem (AES), which has caught some 63,000 traffic offenders on hi-tech cameras in the first 8 days of action, to be reviewed or/and delayed.

Both of them said the AES was going to be a burden on the people and on the tax payers. 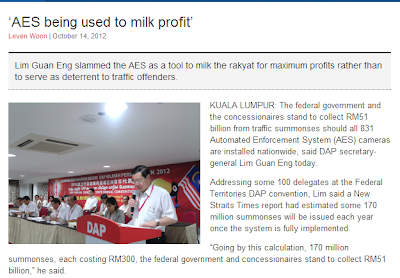 Milk the people? Come on, YAB, you ought to do better than that! How is the AES a burden to the rakyat when the only people who will get penalized are those who flout the traffic rules? If the AES is a tool to "milk" those who speed, drive recklessly and beat the traffic light without regards for the safety of other people, I say by all means, milk them!

Guan Eng's unlikely ally in this is the six-time Barisan Nasional MP for Sri Gading, Mohamad Aziz. Yep, the same one who suggested that Ambiga S, the Bersih & Pakatan poster girl, be hanged for her "treasonous acts".


"The system was postponed three times prior to this but we see it as more of a burden to the people after it was finally implemented. If possible we hope the government can nullify the 60,000 traffic offenders identified through the system."

p.s. While the politicians do what they know best, ie politicize issues, the Consumer Association of Penang (CAP) has urged the authorities to enforce AES system to punish traffic offenders. According to the Transport Minister, AES cameras have been proven to reduce accidents.