Why we should take the Merdeka Centre polls seriously .. 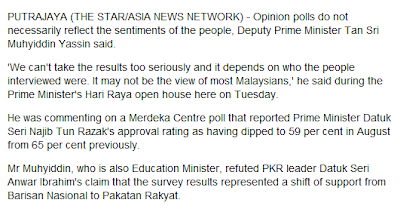 Of words like "too" and "still". Abang Din is right: We shouldn't take it TOO seriously.

Not too long ago, a newspaper that was run by someone close to Abdullah Ahmad Badawi, then the Prime Minister, made that silly mistake and took the Merdeka Centre survey findings way too seriously. After the Merdeka Centre found that Abdullah's popularity  had dipped to an all-time low of 61 per cent, the guy ordered the newspaper to conduct a similar survey using more or less the same number of respondents (1000+) and published findings in Nov 2007 to say that Abdullah was still popular and everything was hunky-dory. Four months later, the BN returned the worst performance in a general election, losing the two-thirds majority in Parliament and five states.

Neither should we take the Merdeka Centrre poll lightly. Or rubbish it totally, like this clever guy did. Remember, the same Merdeka Centre poll had charted Najib's pop ratings from 44 per cent before he took over as PM to 72 per cent in June last year. With 1000-plus respondents, you don't get anything exact but there's something scientific in the methods of the survey. At the very least, we get the picture.

The general picture is, 59 per cent pop ratings means Najib is STILL popular. Now, why would anyone want to dismiss that? The right thing (for BN) to do is to take this perception in the right perspective seriously enough to turn into into something positive. There is STILL time ..

p.s .Journalists who worked under A Kadir Jasin at the NSTP would think twice before using the word "still".  It is a defensive, negative word, he'd say: When someone asks you if you can still get it up, that's not really good. And if your answer is, "Of course I can still get it up ..." that's even worse because you are confirming that you could barely get it up and that there are times that you actually can't get it up!