with updates
31 Aug 1957. The same year Malaysia achieved its Merdeka from the British, Ghana became the first African state to gain its Independence*. A year earlier, Sudan, Morocco and Tunisia got their Independence** and in 1958 it was Guinea's turn to be freed of colonialism. In 1960, the year we turned 3 years old, Cameroon, Senegal, Togo, Rep of Congo, Somalia, Madagascar, Benin, Niger, Bukina Faso, Cote d'Ivorie, Chad, Central African Republic, Dem Republic of Congo, Gabon, Cyprus, Mali, Nigeria and Mauritania became Independent nations.

Today, Ghana, which was one of the richest nations in Africa before the British conquest, is doing pretty well see tables for Malaysia and Ghana). Wars and strife have obstructed the progress of many of these nations. Somalia, as we know, is in ICU. In comparison, we are not doing badly at all ...

Selamat Hari Merdeka. May we forge stronger ahead despite our petty "wars" and may our children live happily ever after us. 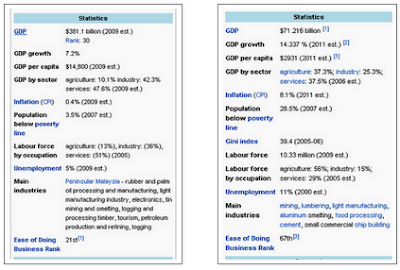 Updates
* .. from the British
** Sudan, Morocco and Tunisia all gained independence the year before from their French masters.

The BBC, which is British, by the way, described Ghana as the first black African country to become Independent ... 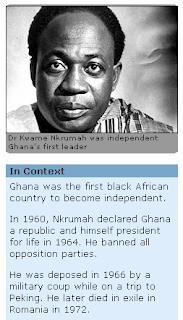