Splash and run an act of terror 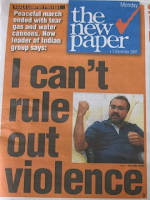 Acid test for Malaysians is the title of my latest column in The Malay Mail. I started the piece with the outlawed Hndraf and ended it with the acid "splash and run" crimes which have scarred at least 18 people. This prompted some readers to ask The Paper That Cares if I was trying to tie up the two, if I was accusing Hindraf to be behind those seemingly random crimes. The only factor linking the two in my article is the word "violence". I was reminded of P. Uthayakumar's interview with a Singapore newspaper at the height of his notoriety (see pic, right). It was a threat to the nation's wellbeing, if you ask me. The same way the splash-and-run is not ordinary crime but an act of terror.Click here to read the original article in the Malay Mail, or go to http://rockybru2.blogspot.com/
at April 08, 2011

Congrats Dato for trying to spin out of the topic that all Malaysians are talking about- the fiasco involving the ever incompetent MACC.

My take is that Hindraf and Uthayakumar are no different from Perkasa and Ibrahim Ali-both people with too much of time on their hands.

And please dont offend our African brothers by calling them dark skinned!

One with road show in US to berate Malaysia's purported policy of systematic marginalisation of Indians. Another at the local front reverberating similar sentiments. Together they set a campaign trail to orchestrate possibly an undue civil protest to exert pressure on the Government. This can destablise the society and harmful to its harmony.
Having taken note of its past shortcoming and weaknesses the ruling Government has made alot of changes, exchanges and compromises to accommodate thier demands and placed Indians in a much respectable andsatisfactory position.
This gesture seemingly is appreciated.It is therefore,uncomplecated to agree that these two have an immense aspiration about altering the complete landscape of Malaysia's constitutionalism.
This is dangerous when one fails to understand his scope of limits and simply refuses to respect the right of others.
I call on all Malaysians to be wise and reasonable. This is a blessed nation.

I have always believed that people who are thinking or actually doing something devious will see it in others who do not.

I wish a leader with a heart of Pol Pot will emerge to rule my beloved motherland Malaya. He will start year zero in this land....destroy everything...AND start everything from zero...then we will have level playing field for everybody in Malaya.

Give peace a chance.

My God, Rocky this is wrongful..the implied meaning of the "dark skinned"
Dark skinned types in Malaysia include many races including Malays, Indonesians, Indians, SriLankans,Vietnamese..so what are u getting at??????? along with the Hindraf story?? Isnt there any circumspection on these matters.. where caution is needed!!

Acid attacks on women and girls are on the rise in Bangladesh. Sulfuric acid, cheap and easily accessible like kerosene, has emerged as a weapon used to disfigure and sometimes kill women and girls. Reported reasons for the acid-throwing attacks include the refusal of an offer of marriage, dowry disputes, domestic fights, and disputes over property. Acid attacks leave the victims scarred and often blinded. Treatment, too expensive for most victims, is an excruciatingly painful experience.

It is estimated that there are over 200 acid mutilations each year in Bangladesh. The growing number of acid assaults in Bangladesh reflects an epidemic of gender violence and is a reaction to women's advancing economic and social status. Most of the victims are young. According to newspaper reports in Bangladesh, in the nine-month period following April 1998, of 174 victims of acid attacks ten were girls under ten years of age, 79 were young women between 11-20 years of age, and 20 were women between 20-30 years of age. Other members of the family and bystanders have also been harmed when they were in the vicinity of the intended victim during an attack. Many cases go unrecorded because police do not take the reports seriously and in some instances even try to convince victims to withdraw their complaints. According to the Ittefaq, the leading daily newspaper, in 1999 already there have been at least six acid attacks in January, four in February, and two in the first week of March.

In response to the growing outcry against violence against women, the Bangladesh government enacted "The Women and Child Repression Control Act-1995," which legislated the death penalty as the maximum punishment for perpetrators of acid attacks. This law, however, has not been effective in reducing the incidents of attacks and the Bangladesh Parliament is currently considering new legislation to address loop-holes in the law. According to media reports, the government has appointed a six-member task force, headed by the Joint Secretary of the Home Ministry, which has been entrusted to put forward recommendations on acid importation, production, and its use and control.
http://www.youtube.com/watch?v=Y7fvl3QFVTc

Brother: A small contribution if I may; you used the term "self-grandiosment", which is neither here nor there. Perhaps "self-aggrandizement" would be more appropriate? Cheers,

The widely accepted definition of Terrorism:

"The employment or THREAT OF EMPLOYMENT, of extra-normal violence by an organized group
against non-combatants in order to compel the wider community
to comply with the organized group’s political agenda"

Which part of the above definition that HINDRAF members do not understand??

HINDRAF is a spent force. All the stupid Indian buggers have gone crawling back to Najib after he dished out some goodies.
I am more worried of the idiots in Perkasa who are out to wreak havoc. Have you read what Ibrahim Ali( Dont Talk Shit Fame!) has to say about women. The man's a joke!

The police had better their job fast and quick to protect Malaysians from terror and violence perpetrated by terrorist in this country!

This act of terror would not had happened if the goverment is not being seen as weak, with the leadership ,been seen always bowing to perssure.

It's not just hindraf,but other racial and religious groups as well.
We are just wating fo the time bomb to clik '0'.

Just remember everyone can play the same game !

Our row of shops were once terrorised by parang weilding "red eyed pendek2 orang-minyak-skins".. GANAS.. with no MERCY..

They would just rush into the shops and chop at anything along their way. All here decided to close shop 8pm, always on the look out alerting one another at any signs of suspicious looking character as per described above..

Alhamdulillah, after Hindraf was officially banned, these terror kind of suddenly stopped??? We are back to business as usual, now till 10pm.

Was it planned or merely coincidental?

I think extra police men and women in plain clothes should be stationed at the hot spot where the acid splasher prowl. The acid splasher(s) are getting bolder by the day, the law of probability says that they will be soon caught.

Their random attack is what makes them so dangerous. In the mean time every body in KL should take extra precaution and be aware of your surroundings, when you walk along the walkway try to keep a distance from the road.

I wonder if this Prof Awe Kecik at 10:16 PM has his head fixed on properly, to call for a Malaysian Year 0.

Look at Cambodia. Now a basket case. The only thing supporting it is tourism from people who come for Lonely Planet holiday, see poor people, see Angkor Wat, see skulls in museum, then go back home to tell everyone about their travels. No industry, infrastructure, healthcare and education.

Take a AirAsia trip to see what the country has become.