NGOK. I thought the claim that 1805 individuals had died in custody was bad enough, but now one Perak DAP clown has made a claim about deaths in MACC custody so fantastic that you have to wonder if he's got anything up there at all! Read Big Dog's barks about Demons of Anti Public here.
A police report has been lodged, read here.

I had to tweet about this clown myself too, just in case there were people stupid enough to believe his claim: 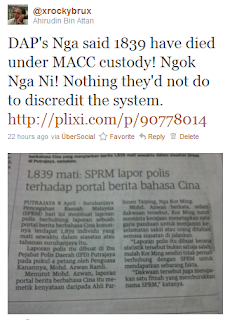 There have been two deaths too many. Can you tweet about that too you scumbag UMNO stooge?

this communist should be arrested under ISA long time ago dy..

The proof is in the showing, not the saying.

MACC maybe guilty of a lot of things -- negligence, check, having nincampoops among their ranks, check, & many other human failings.For this, MACC must be held accountable all the way to the top.

BUT MURDER, I doubt it very much. Why would they want to ice key witnesses esp. having been so close to solving the case? To kill the "goose that lay the golden eggs"?


Maybe the talkcock Nga was referring to Jinns, bunians & other heathen spirits, eliminated via cleansing rituals at MACC offices following the "jumping incidents"

I like that name you gave him! Ngok Nga Ni

This ngok fella is speaking with his arse rather than his mouth...

mmg ngok...sort of MACC is full of cold blood killers..this kind of people deserves ISA, speak without fact just to gain support..what they are afraid of is if MACC proves suicide of the latest case then TBH case also will be concluded as suicide..and they have nothing more to bark.

the guy who claimed it, obviously NGOK la. BUT the guys who believed it, double NGOK and triple stupid.
I guess, that's is the worst kind. the king who blindly believe and fight for it but never actually understand and have any facts about it.

Goodness gracious! I really don't understand these people. MACC is set-up to eliminate corruption. The way these people keep on bashing MACC, it seems as though they don't want MACC to succeed... hemmm.. maybe they are the REAL corrupters!

A lot of politicians on PR side are true genius spin masters lah..

The government should take action on those who throw untrue allegations. We the people need responsible politician from both side. Those who told lies should b voted out n b brought to justice.

1839 deaths in MACC, the skeletons are coming out from the closets...

Drag this mangkuk ayun to court. This no longer massage statistics, this is raping statistics.

What does he think SPRM stands for ? A death squad ?

And the 2 deaths in the SPPRM office .. who benefits from the death of 2 key witnesses ?

SPRM or those involved in the crimes?

A very disgusting n irresponsible acusation to the MACC/SPRM..wonder who's been feeding such wild shamefull info to this guy,so called YB..well,my suggest is.. ISA should teach a valuable lesson...'WILD SUGGESTION'

The police should investigate Nga for spreading false news and Sedition and charge him immediately. His big mouth is a danger to society.

MACC receives on the average 6,000 reports per annum. Of that, only 500 could be investigated to the level for prosecution to consider.

300 of that would be charged in court by AGC. Only 80 would secure a solid conviction.

Ngok Nga ni says 183 died in an average year. So, 500 cases investigated means that 1 in 3 cases seriously pursued by MAC end in death!

I notice dis opposition fellas really like to use the word "scumbag". Scumbag here, scumbag there, everywhere scumbag....except for Selangor. Cannot use plasticbag on weekends, save the environment lo! My ass!

You must remember the origins of DAP, socialist from communist with anti Government propaganda as their expertise...

So always be on guard against the fifth column

Rocky , I believe as a journalist with creditability , it is your responsibility to inform the public the mistake made by China Press as you quoted the wrong report in your blog post.