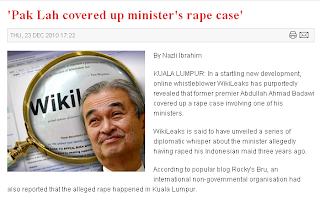 
Sheih Kickdefella, who recently parted ways with PAS, which had engaged him to lead a propaganda war during the PRU12 in March 08, also has his take. He said Husam Musa's party which now rules Kelantan and Kedah knew of the report on the so-called "Rapist Minister". Read his "Allah Ta'Alla Maaf Dah".

Shamsul Yunus says if it's true the said Minister had raped his maid, he should face the music. And if Abdullah Ahmad Badawi had covered up for the Minister, the MACC should investigate the ex-PM for abuse of power.
at December 25, 2010