Bloggers For Satire. Many people have been asking me, who is Hassan Skodeng?

Well, Skodeng is a journalist and cartoonist who started a blog not too long ago to help readers not to take themselves too seriously. You may have seen and enjoyed his cartoons published by The Malay Mail. He is no LAT but he's as easy-going, unattached (to any political party), and right now quite down. As an executive editor of The Malay Mail, he also writes the column Uncommon Sense for the afternoon daily.

Last night, we found him a lawyer willing to take up his case for almost nothing for now. The whole of today, Skodeng will be busy trying to raise money for bail tomorrow. But money is not what he's asking from you. He needs you to lend him support with your physical presence tomorrow at the PJ Sessions Court.

I'll see you there.

Skodeng is being charged under Section 233 (1) (A) for sending out false news/info with the malicious intent to hurt. He could be jailed for ONE year and fined up to RM50,000. 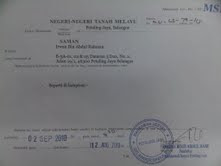 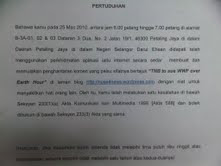 Bloggers have come out strongly in support of Skodeng and satire.

1. Holy Mother Crap! by lawyer Art Haron (read also his posting earlier this year No Joke please, We are TNB)

2. When Satire is crime, Comedians beware by could-be-lawyer Shamsul Yunus

3. Are Brit-educated Che Khalib and AG and MCMC officers too "bodoh" and insular to understand satire? by A Voice aka Husin Lempoyang


Anyone with any ounce of intelligence would notice that the blog header indicate it is not a serious blog. Immediately upon reading any of it's postings, one can sense Nose4news is a satire blog, just like Husin Lempoyang.

Yes, let me admit that Husin Lempoyang is mine. It is for that not so serious moments. Go ahead Monsterball, go after me if you are still around!


I bet you could laugh over and over again, over this latest fiasco by our very own Cyber Police plus the supporting act of the Attorney General's chambers.
5. AG's inconsistency or version of parody by Big Dog

... Hassan Skodeng’s charge is about inconsistency and probable the practice of selective prosecution. Unless, probably the AG is doing his version ‘parody’. It is not likely. Neither it is funny.


I remember in mid-1990s enjoying on video the Instant Cafe comedies - someone recorded them for posterity. One was making a comedy out of Anwar Ibrahim the then deputy prime minister as a girly-man, and Dr Mahathir as a haughty boss. This was before 1998 when Anwar became entangled with the courts with sodomy accusations and Dr M became 'MahaFiraun'. Hearty laughter for the paying audience.
No harm done, except perhaps to make everyone loves politicians more because they seem more human rather than idiotic robots.
Errr but now, I think some people cannot take a joke anymore.
Benda gini pun nak bawa gi court. Are you see-rai-ous?
Apa nak jadi nih?


Have our authorities lost their sense of humour? Or is this an attempt by the Attorney-General and Malaysian Communications and Multimedia Commission (MCMC) to intimidate bloggers?

IN A WORLD, where laughter is SIN! ONE MAN, or rather, a baboon, dared to make fun of TNB, and TNB has taken him to court for lese mejeste, or something like that. I don't know. I never studied law. All this French-kissing and Latin terms confuse me. Maybe I should refer to the paginarum fulvinarum.

If TNB can sue this baboon, Hassan Skodeng, they can sue anyone. In the interest of preserving freedome of speechless, I say, neighhhhhh!