DSAI, Nor Mohamed Yakcop and a USD8 billion question Down Under

Updated
The article that appeared on Merdeka Review last Friday (Feb 12) on Anwar-NMY-Abrar and US$8 b Aussie-Labuan firm is loosely translated here. 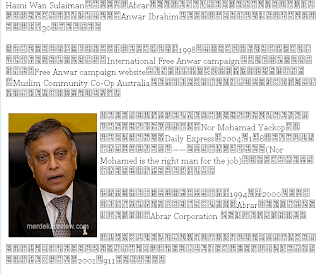 My "Bugger off ..." posting got me this email from Australia this morning:

You migh want to publicise the fact that these Aussie MPs have all chosen to ignore this report on the ir very own ABC Radio-http://www.abc.net.au/rn/backgroundbriefing/stories/2006/1754286.htm

Follow the links from that ABC interview and end up asking the US$8 billion Question: Who are these Aussie MPs protecting?

Names like Rahim Ghousse, Anwar Ibrahim, Nor Mohamed Yakcop keep cropping up. Also Abrar, the Free Anwar Campaign, and a few Arabic names as well as an Islamic finance outfit run by Catholics.

Ganesh Sahathevan: I was immediately attacked on the Free Anwar campaign website.

Peter Martin: The Free Anwar campaign attacked you for your work on the Commercial IBT story?

Ganesh Sahathevan: Yes. In fact a director of the Free Anwar campaign, on a related Anwar website, a Malaysia Today website said, this is still on their website: 'Any investigation into Commercial IBT will reflect badly on Anwar Ibrahim.'

Peter Martin: Anwar Ibrahim is a former Deputy Prime Minister and Finance Minister of Malaysia. He was jailed on charges of corruption and sodomy in April 1999. Behind the charges was his Prime Minister, Dr Mohammad Mahathir.

Anwar's supporters say the charges were trumped up. He was eventually released from prison in 2004.

There's an interesting cast of characters in the story you are about to hear. One of them is Dr Rahim Ghouse. He ran the worldwide campaign to have Anwar released, and was a political ally of Anwar's from student days in Malaysia and then a factional ally of Anwar's within Malaysia's ruling party.

Rahim Ghouse fled Malaysia for Perth on Anwar's arrest and then moved to Melbourne, where he set up the international Free Anwar campaign. He was the owner of the Free Anwar campaign website at the time it attacked the SBS program.

The ABC radio interview that the Australian MPs chose to ignore was aired in Oct 2006. Last week, a Malaysian Chinese language daily picked up the pieces and made the issue current again. If someone can translate the Merdeka Review's 12 Feb 2010 report here. 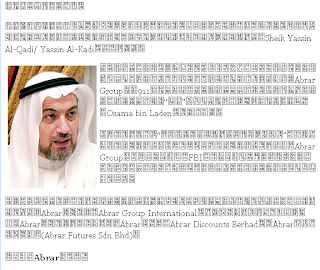 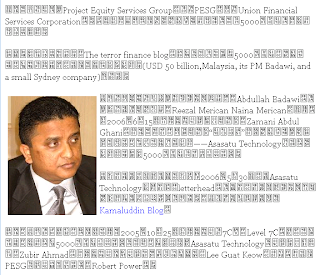 Since Nor Mohamed Yakcop is being implicated in these reports, perhaps the Malaysian Anti-Corruption Commission may want to ask Hasbie Satar, NMY's political secretary, where he got the cash from and what is the money REALLY for? RM2 million is a lot of RM50 bills ....

And here's another reason why the Australian MPs should bugger off:
Mass murder of Aborigines and foreign students

p.s. The Peaceful Protest against the OZ lawmakers has been moved to 10am on the same day (Wednesday 17 Feb) and same venue (Australian High Commission in KL).