PKR vs former PKR at Penanti 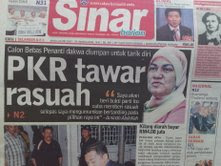 She has alleged that Anwar Ibrahim's PKR tried to bribe her so that she would pull out of the Penanti by-election.

PKR is quick to deny the accusation, here. Tien Chua, the party's information chief, has told Aminah to prove her allegation.

I totally agree with Tien Chua (pic by Shamsul Yunus) as I have said too many times that you have to be able to prove what you say/write/post, especially if you are making such a serious allegation as rasuah.

Anwar is suing Anifah Aman over a bribery allegation made in front of the Americans, here, so expect another suit.