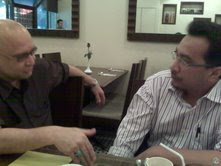 A clash of ideologies. I don't suppose there has been a race for PAS deputy president post more crucial than this one. So crucial that the outcome could have a major bearing on how BN and PR will fare during the PRU13 even, which is still a good 3 years away!

Husam has fired the first salvo, effectively calling incumbent Nashruddin Mat Isa a pro-Umno PAS leader. But even before that the labeling and name-calling had begun.
Reading the Malay Mail article posted by Sheih Kickdefella, h e r e, you are not sure who's liberal and who's fundamentalist, and there's such a thing as young professional liberal, too liberal, and pro-liberal fundamentalist!

Jeff Ooi calls it simply a PAS-PR vs PAS-UMNO contest.

Either PAS has come of age or it has gone ideoligically berserk beyond return since March 08.

p.s. Husam was one of the candidates I "followed/supported" during the PRU12. I still believe he has the potential to go all the way in Malaysian politics but it must be said that some perceive him now as a right-hand man of Anwar Ibrahim. Husam needs to shake off that stigma.
Pix of Husam and RPK during out tea in Bangsar in March 08.

Notes: In my interview with Husam on March 6, 2008, which was published by Singapore's mypaper, here, I referred to the man as PAS' No 2! I stand corrected.

Since when so many UMNO people pay so much interest in PAS Deputy President contest?

Husam and Nash are intellectually alright. But Mat Sabu seems to be an unpolished street side peddlar.

That leaves Husam and Nash.

Between these two, Husam has the right looking face but Nash is not so orthodox in thinking.

So, just let the voters decide which should be their idol.

Everybody including those Outside Pas Knows, Husam is Nik Aziz's Right Hand Man.......
He was Groomed from Day 1 by Nik Aziz to Lead PAS into the Next Generation. He is Far Far better than KJ and Mukhriz by any comparison....

When Pak Lah became PM, my chinese friend once told me that he cannot be trusted. She said according to chinese face reading methodology, people with that kind of nose (long, hook shape) is not trustworthy, slick, snakey, etc. I don't know much about face reading, but Pak Lah's tenure, and now Husam's face, make me wonder.

Will the result be similar? Interesting ...

Is not PAS-PR vs PAS-UMNO, but PAS (kok suker DAP) vs PAS-UMNO. Husam got most of the highlight from PR mouthpieces. Well PAS is become more secular nowdays with the ppl like Husam and Khalid Samad around.

Husam
A useless son of a bitch who is a closet oppurtunist eyeing the seat of power to fulfill his desires. This scumbag of a poli, the handiwork of turban, Nikki Lee Aziz, will sell country, race and religion to the highest bidder just to taste power.

An affectatious slimeball, in the mould og Ngee Char, this bugger having helmed the finance portfolio for the past three years or so has nothing to show in terms of performance much less results. Kelantan is still mired in the nether zones of the poverty chart and unemployment is way above the national averages.The industrial base is all but non-existent. The only thing this fucker has done is to put up the last sliver of virgin land (the Gunung stong area) to be environmentally raped by his minions probably to grease his palms and that of his election machinery.

Not many Kelantanese, I know hold him in high regard and we all know he is an Anwar plant, cultivated by Kamaruddin Jaafar and tutored by Nikki Lee Aziz, the pedantic munafik for all ages.

Not very subtle choice of photo, Rocky.
What's your point?

Husam.envied by many.. even from his own party man, is a leader to watch..

He and Nazar are of the same mould..intelligent, practical, simple n honest men always stay on focus. True to PAS they are men of principle deeply religious (dont need turbans to show off).

Judge them by their words and deeds.. no need for political rhetoric. They are the modern version of TG NIK Aziz!

why need to cheat? where is your honesty, fair reporting?
.
.
lebihpercayaular@daptonto999years.com

True to PAS they are men of principle deeply religious (dont need turbans to show off).- Anon 5.23pm

Deeply religious, your arse Mr Balaci.A deeply religious man will not swim with infidels and play with munafiks to reach his goal. Husam, Nizar et al are the new melayu baruas who affect a holier than thou mien vis-a-vis other Malays/Muslims and who are adept at using Machivellian tactics to reach their goal: power, gals, money.

Beneath that suave, liberal, progressive venner of modernity and varnish of religiousity lurks the judgemental, power-addled, holier than thou snake nay komodo Dragon who will outturban the Turban Munafikun Nik Aziz himself.

You are perversely right, anon..no need for turbans for it will make everything obvious later as the Nik "Munafik" Aziz case proves + it will give the wrong image in a "beauty contest". Husam and Nizar are the new hidden dangers to Islam and by extension the Malays, skulking around in the shadows for so long they duped everyone in PAS with their religious men while all the while scheming like the devil to grasp power. Now, its time to dupe the wider Muslim masses with their so-called progressive streaks when in reality they are nothing more than shells of men.

As someone else wrote earlier, which i will paraphrase a bit: ball-less, chingkie twat munching, penis gobbling, arse licking, semen drinking woe(men), who claims themselves to be MEN, but could never bring themselves to stand up for religion or pribumi rights!. Sekadar, lawan sultan, permainkan agama perlekeh raja dan orang melayu, dia orang bolehlah and not a "kote" more"

P/S : tell me what they have achieved in their "stellar' careers to-date to affect such arrogance and chutzspah. These are the Kjs of Pas..hahahaha. Envy? Marlowian horror at Kurtz is more like it!

Husam is most well dressed PAS man and handsome. Turns me on.

Second well dress PAS man is Nizar. Looking incresingly a desperate loser. Should ignore Ngeh and Nga to withdraw as a gentleman. Turn off.

Husam will be win because of using a methodology called Ladang Rakyat. Similar to giving land and money to PAS members for the party elections. He is living on the same trade from our bro Anwar who was famous with money politics while he challenged Tun Gaffar Baba.

So let it be

Husam seems to be a good sensible guy and he has stated clearly his goals and where PAS should head. Nash has not stated his goals, well he wants to join UMNO in a unity govt. What does PAS members wants?I hope not a untiy govt with UMNO cos UMNO is like the flu, they are contagious and once you have the flu, they take over you and you will come back like a good boy every now and then for medication.

Husam and Nizar will be a dream team in the future for PAS and can lead potentially lead malaysia.if anyone I can trust is Tok Guru Nik Aziz and I'll trust his pick. Husam Anwar man is just talk. why can't Husam be his own man.

rockybru - i do like the pic pick. some message there?

Dear Stevie,
You don't like the picture?
But why? Pray tell me.

Bru,
Stevie aka Rocky doesn't like it as it says a lot about Husam in a snapshot, doesnt it. a tad too close for comfort. Remember, a pix can paint a thousand words+ where else can one get a pix of 2 opportunists living it up away from prying eyes.

Husam and the other munafiks got it all panned out. Put Sabu in there, to chisel away at Nash's base and take the inside rail to victory, master tactician, he thinks, he is but clear as daylight to even a small boy.

But then, the real deal PAS munafiks are just that, munafiks, for when push comes to shove, they cant come with a plan for the future of the Ummah (to use their lingo) much less a sketch to save their own arse.This is what you get when religion is hijacked by Munafiks, the rest of us Muslims get a bad press + we have to put up with the judgements and bitching of this holier-than-thou shit while they parcel out the goodies with their Chingkie friends.

Turban Nikki was doing that undercover in a boondock for 18 years, time for Husam to bring his bastard Tok Guru's method into the mainstream and leverage on it! hahahaha. He is dreaming in broad daylight about replacing UMNO but then a Munafik is always a dreamer, right?He plans, he schemes but because of his disease, inshaallah, he eats crow.26 years of infusing them ABIMites, JIMmies et al into PAS is finally about to pay dividends to one AI who took the other tack of wrecking UMNO from within.

Welcome to Berak Obama's new American dream : the sanitised, polished Gucci dressed, Rolex wristed, Clark heeled smooth talking Islamite who will be America's beagle in a jiffy and manacle real Islam in a tizzy. How better can it get? these guys are neutered, cockless Karzais and Mubaraks, a contrast indeed to them nettlesome, independent-minded Ahmadnijads and Mahathirs, hahahaha!

it's not that i "don't like" the picture, per se. but i believe in reportage, press photo-editing has something to do with its relevance to the text, either to illustrate, or in some more artsy situations, to suggest.

there are many, many photos of husam you may have access to, but your choice here makes it looks like you're trying ( a bit too hard) to "link" him to RPK, a highly controversial character and a fugitive.

That's why I asked: what's your point?

people like rocky want Nasharudin to win! It will be a big blow to umno if Husam wins. Nasharudin is an idiot who will destroy PAS. I believe most PAS members are against PAS working with UMno.

Someone here mentioned that Nizar & Husam will make a great team, which could potentially lead the Malaysian Government, and I agree 100%!