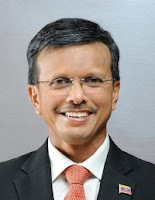 Question Time. Raja Nong Chik, the FT Minister, is proving to be quite the savvy one. Every Wednesday (from today) he will dedicate 60 minutes of his time, from 6 pm to 7 pm, to answer your questions "live" via Facebook.

That, I believe, is a first for a Malaysian politician.

So, city folks, if you want to know how RNC is going make KL crime free or you have a problem with roads being closed for races or you think he is not going enough, etc, do visit his Facebook, here, and leave your mark.

p.s. In case the link above doesn't work, go to the Minister's blog here and click on his Facebook.

Rocky, it is very funny when PM appoint RNC as FT Minister.
1. he has no experience in administration
2. all of this businesses are with DBKL. so basically conflict of interest.
3. He hardly know outside LEmbah Pantai
4. He win by spending $$$$ on election

Dear Rocky, I believe Datuk Saifuddin Abdullah had been having these kind of sessions for a couple of months already.

However, Raja Nong Chik must be the first minister to do so.

I am glad that these politicians have 'turun padang' online, and what better way to do it through Facebook? People seem less shy there, and the conversations more transparent.

Everyone jumps into live facebook Q & A thingy nowadays, supposedly to get feedback. DBKL has 12 branch managers, and all sorts of Pengarah. Just get them to work lah, its that easy. Why so dungu one?

Wah. He looks so handsome. He is the best looking minister.

Interesting idea. Yes, I believe he is the first Minister. How do i sign up for facebook?

I'm pessimistic, will a mere 1 jam of FB be of any effect?

Unless RNC had super efficient brain power to cope with FB user.

sorry to burst your bubble but many PR politicians are on facebook and they take questions also. in fact we can freely interact with them.

so RNC is not the first!

Dato' Saifuddin launced the same program about 1-2 monts ago. So Raja Nong Chik is not the first.

It's a very good start. A minister cannot always turun padang and be everywhere. Going live on the internet shows this fella has the intellect and guts to face rakyat head on. Remember, we still have ministers who can't even turn on the PC, much less write English (god knows how they made it to the top).

If there's something wrong with the government, it's best for top guns to offer an channel for questions and explanation. This is what the rakyat want. Not use police to intimidate, ISA, raid offices etc. That's typical jaguh kampung trying to tunjuk kuasa.

Prefer to chat will Datuk Seri Dr Zambry Abd Kadir on Facebook though but I doubt he'll think it's a good idea.

oh, you mean the one who asked a woman to accompany him to the toilet?

i agree about the VIPs need to get closer to the rakyat. and i also good with the fact that there are a lot of young voters which may in large determine the next PRU.

but, ish, i dun know la. friendster got?

At least someone has taken the initiative to address the public in an up-to-date sort of way. Better than nothing rite..? anyway, just want to say thank you for the inspiration.:-)

p/s: May I put a link your blog in mine? thank you bro.

It is to his credit to recognise the important of communication as a community leader. Let's hope he ensures that as many people as possible in FT knows how to communicate with him via Facebook.

Umno leaders are worried that the young ones have lost interest in UMNO (or in Msian politics in general).

What a bright way to attract the young adults to get involved.

It isn't all about who's in power and who's ruling. It's about contributing to your society once you're in power.

I am also on FB. There are many Malaysian political personalities at FB too. Just visited RMC page and there are tons of complaints and suggestions. Just wondering if he really can answer (read solve) at least a few of those problems, some which are really genuine .. Wali Kota

and most importantly, zuhri is a stong supporter and machai of kj. howlah ....

Isnt this RNC who invited along the Kampung Baru assemblyman Dr Lolo to the toilet recently?

Dato Saifuddin has been doing this for sometime now. That makes him the first politician to get live of FB.

He is the first MINISTER who did this. Congrats RNC!

Ho hum .... FB has been up for so long and we are so happy when a minister spend time on facebook? He might be playing texas hold ehm for all that we know. hehe

it's good to hv more leaders to operate using FB. True, Datuk Saifuddin Abdullah is the first politician who introduced a live chat session called FB Hour, if im not mistaken, last April. Good feedbacks especially from the youth.It will be more impactful if our Mr PM has his own session.