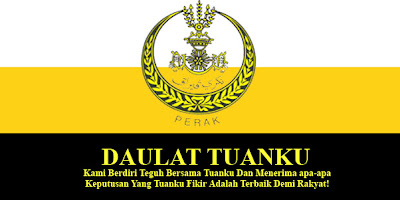 Is this the Ketuanan Rakyat that we've been promised?
The right to give the Sultan your middle finger and pelt his prince's official car when you don't agree with them. Is that your idea of Ketuanan Rakyat? The right to accuse the HRH of "failing in thinking as a Ruler of his subjects"? [Who the duck is K. Kabilan to pass that kind of judgment on a Sultan, anyway? Read here]. Does Ketuanan Rakyat mean that you leave it to the Sultan to decide but defy him if his decision goes against you? And profess "Daulat Tuanku" only if you think you can use the Sultan to fight for your political battles?

This is no Ketuanan Rakyat.

This is what I'd call Ketuanan Pakatan Rakyat. You are either with them or against them!

I am placing the Daulat Tuanku logo up there for an indefinite period. I'm asking you to do so, if you have a blog or on your Facebook, etc. It's not in support of any political party; it's about preserving an Institution that is part and parcel of the Rakyat and the Negara.

If Karpal or Nizar or Anwar or Hadi want to drag the Sultan to Court to defend what you think is the right of your political party, that's their right so go ahead. I only ask for one thing: Biar beradab, jangan biadap dan tak payah derhaka.
And remind ourselves of the nuances: it's not just Kesetiaan Kepada Raja; it's Kesetiaan Kepada Raja dan Negara.

p.s And I hope no one resorts to hanging the Perak flag or the portrait of HRH Sultan Azlan Shah upside down to counter this blog campaign

Not supporting the campaign but read you must:
What more to say? by RPK