"Most violent" by-election under way 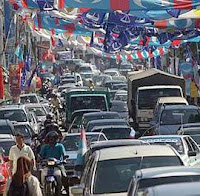 original posting:
70 police reports. Anwar Ibrahim, on his way back to Malaysian Parliament, cast his vote at Kubang Semang about 9 am. We missed that, caught in a two-hour jam (see Star pic) from Seberang Jaya, where his main opponent Arif Shah had cast his vote at 8 am. Syed Hamid describes Permatang Pauh (PP) by-election "the most violent in Malaysia's history" but we haven't seen any untoward incident. As we crawled in traffic, I saw BN and PR workers and supporters side by side , mile after mile, along the road, handing motorists caps, Anwar masks, and free copies of Utusan Malaysia. The heavy police presence, seen as a nuisance by some, gives a sense of greater security to others.

SMSes in the longest traffic jam. Teoh, a blogger friend from KL, sms-ed me around 10.30 this morning to know what's up.

Teoh: How's the mood on the ground? U think DSAI convinced Malays there he is 4 them? I think mee sodo tak laku.

Bru: Hey bro, caught up in the longest traffic jam in PP. DSAI will make it but his majority will be reduced .... Malay votes 50-50, very dependent on PAS' strength. How's KL?

Bru: The frogs will still lompat. Q is if there are enough frogs. I doubt Sept 16 will happen but DSAI will be in Parliament.

* Wan Azizah, Anwar's wife, won the PP seat by a majority of over 13,000 votes in March. Lower turnout of voters alone will rob DSAI of a similar margin. If you ask those in BN who are close to the action, they'd say their man was only about 5,000 votes behind Anwar as of last night.

I was surprised to hear Hamid Albab say that on the news this morn, that this was the most violent elections in history.

Apa dah gila babi ka dia? What the hell is he talking about, man? Does groping puteri umno asses constitute violence? I thot that was foreplay?

This hamid fler, a true Psychopath ...

"A person with an antisocial personality disorder, manifested in aggressive, perverted, criminal, or amoral behavior without empathy or remorse".

KLites predict PKR have a majority of 25K... anything less than that no frog will jump.

I'll take you on DSAI getting less then 15k votes. He'll better his wife's majority. The people had enough of the bull. BTW. The cops had roadblocks in KL too! What the hell for? Also, pray tell us, WHO are happy with the extra police presence and roadblocks? I really want to know.

Today he sees something different..

USUALLY he SEES THIS

...here's hoping for the best for Malaysia and Malaysians.

7 March, Mat tempeh still confident of 0 opposition in Selangor. Top political analysts forecasted kelantan may fall back to BN. My take is, if on a level field, Arif would probably lose his deposit. So, it don't really matter whats the majority shall be, for we know that the people of PP and the bigger majority of Malaysians are behind Pakatan Rakyat. They can stuff their phantoms up saiful ass for all we care.

and don be surprise if the result favors bn with 500 majority, and political tsunami at aab/najib side. would rakyat launch massive rally in kl again ?

there he goes again. bombs? what bombs, syed? usual garbage from you. wonder how you are promoted to the present position.
guess the onyl consolation is that you can no longer lose another island to our neighbour for us. gee, now your successor has to quietly drop the word "island" on your behalf.

usual tactic from malaysian's one and only syed albar.
his job is to create unnecessary hazzle for you and me so that we can turn against the opposition. what crap logic is this?

Whether 1K or 25K, Anwar in Parliament will keep the once mighty Barisan in check. See what his entry into politics has brought us:


And what will happen the day after he becomes PM:

If all these do not happen, we will vote them out the next elections. We have the power now.

Of course that was foreplay. The main course is the arse!

I put my money on Ariff,
I may be wrong but BN chose the right candidate this time.

No parachute loudmouth idiot who spews out stupid statements or some ultra malay politician.

I say our man is trailing around 3000 votes. But then again who knows, Anwar is popular.

Ahh yes I forgot that this is already a concluded election that Anwar Ibrahim can never lose.

If he wins it's the rakyat's choice.

If his vote majority shrinks it's phantom voters.

If he loses than it's a conspiracy.

A win-win situation I guess.

A defining moment in Malaysian History was achieved when DSAI won the by-election in Permatang Pauh yesterday with a landslide victory over his opponent just 3 days prior to Parliament presenting it’s 2009 Budget (29 August 2008) and 5 days prior to Malaysians celebrating it’s 51st Anniversary of Merdeka (Liberty Day) on 31st August 2008.

Sit tight for the next episode on 29 August 2008, the preview to 16 September 2008 when Malaysia celebrates “Freedom Day”.

Can you please checked why Tun Dr Mahathir has not updated his site.

So its enough to be PM.

The size of Anuar's majority is now irrelevant as people will be able to rationalize why it came down. Undi Hantu, dirty tricks, money politics etc etc. Even with 1 vote majority, Anwar is in Parliment and that is his critical next step. Anwar in Parliament but after that, what next?

I have no power to predict the election but I think I can predict tomoro,
From PKR side:
if anwar win, anwar win praise the government for good and bersih election

if he lost, he will curse and condemn the EC with mismanage of by election and claim he has proof to show the mismanage of EC, cause riot everywhere and in the end. WHERE'S THE WEAPONS OF MASS DESTRUCTION, GOD DAMN YOU, BUSH. eh? We were talking about Malaysia Scene..

Today at 12pm, when I surf TheStar website, I read the news about a man in PKR shirt was arrested in Pematang Pauh for attacking an elderly women who try to cast her vote. The news was highlighted in yellow “latest” so it must be on the spot latest news.

My first thought was it was outrages made up story from the TheStar so I ignored it. When I tried to search for the same news an hour later, it was no where to be found.

I bet those stupid editors of TheStar notice that not even a 5years old will believe that f8cking stupid story! You a88hole Editor!

Did anyone else read this news on TheStar Website, I’m keen to know if I got optical illusion or am I dreaming?

Anwar Ibrahim is on his way to be the next Prime Minister of Malaysia ... Wali Kota

dont see why the need for roadblocks apart from denying the rakyat to choose their leader!

BN will get their ppl to camp at polling stations thus enabling them to vote easily and then using roadblocks to deny PR supporters from doing theirs!

If AI win by a smaller margin, the rakyat knows better that the entire results hv been rigged n manipulated. BN n UMNO can shout that the support from the rakyat for AI is weak but deep down they know that without any help from the police n EC the umno goon would hv been wiped out clean!

Time to march on!

To Putrajaya and kick de fellas arse and those of his goons!

Bro,
Understand that while everyone busy on PP polling,this bustard son of bitch 'Botak' minister sneaked into Parliament tabled the DNA bill for 2nd reading while ago,which supposed to be at later date.What the Fxxx this idiot try to do???..if i have the power,i will strip naked this asshole,hang him and get the bull elephant sodomise him..really bustard asshole.

One keDAILan top man with his wife.....told me he is so glad..guys like me...come all the way ...to support Anwar and ignore the fears of the 6000+ police force.
We saw a battalion of soldiers march in with machine guns..like we are at war.
I asked one sitting down at hotel lobby..why are you here. He replied to protect me. I asked him.. protect me from what? He kept quiet..but I pat him on the shoulder and say thank you.

I have a strange feeling..with 6000+ police.....still such a traffic massive jam......means they are out there..to add to traffic jams..create tensions...but for one main purpose...many may forget.
They are out there to protect malay clashes.
Had the survey showed clashes between races...I wonder will they be that concern.

Anwar's on the fast lane to Putrajaya!

Rocky
Your doubt that Anwar is not going to win with a majority of more than 15k is unfounded. Moral of the story, must not rely on sources from BN. Or TV3. Or Utusan. But we will still rely on your blog for breaking news. Peace and let's celebrate. Sing it again, Emilia.
aMiR

“Currently, to me, it’s like replacing one faction of UMNO with another, esp with defections on the ground and if froggie MPs jump.”

It’s a chance (risk?) we Malaysians are gonna have to take. The 15K+ thumpin’ majority proves a large number of Malays down there believe in his reform message and also believe that he won’t be sellin’ ‘em out by championin’ Ketuanan Rakyat.

As I said before, DSAI is no Angel nor is he the Messiah. But he was in the right time and right place and somehow managed to re-invent himself from the fallout of Mee Sodo I. Remember, this was the same guy who was wavin’ Dilemma Melayu like the Little Red Book in the 70s. Dr. M, watch your erstwhile Protege stand on his own two feet before your very eyes. If anything, Tun, the credit for DSAI’s resurgence and popularity is solely due to you. Kamsiah, Kamsiah! BTW, Tun, read Frankenstein yet?

i dont like PAS. I hate people trying to shove their self-righteousness and what they THINK religion is all about, down my throat. sukati mak bapak aku la aku nak telanjang ke, nak bogel ke, nak tunggang terbalek ke, nak mabuk ke, etc etc. They so hipokritikal.