"Thank you, Puchong". Karpal Singh's son Gobind has put up his first posting since winning the Parliamentary seat in Puchong at the General Election on March 8. He said he'll update regularly. 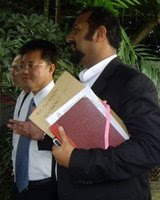 I first met Gobind last December at a bus station in front of the Bukit Aman police station. He had earlier accompanied blogger Jeff Ooi, as the blogger's lawyer, to meet some CCID officers over a police report against Jeff for something he said on Aljazeera.

Ah, did we think that both Gobind and Jeff would, three months later, ride a Rocket to Parliament?