Doing away with your 1 sen 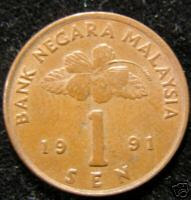 Say goodbye to the 1 sen coin.Bank Negara is expected to announce today that it does not make sense to mint 1 sen coins anymore. What with rising inflation, our billion-ringgit mentality, and next year's crippling increase in petrol/diesel prices.
Expect an announcement on this later today.
With the move, businesses may be asked to round up their prices.

So instead o paying RM1.92 per litre for your petrol, you may be paying only RM1.90!
That's what they called a lull before the storm!

May I please put in my one sen's worth? With our billion ringgit mentality (touche!), may be it is practical to do away with it.
Except I don't like the part about the rounding up. Rm9.99 rounded up to RM10, i can live with that.
By the same token if an item costs RM9.96, will the shop/mart/mamak round it up to RM9.95 or can some mamak round it up nicely to make RM10? Aiyoh

So instead o paying RM1.92 per litre for your petrol, you may be paying only RM1.90!

RM1.95
round up, not down
hehehhehee

Other countries have done this 'rounding' for years.
However there should be 'rounding up' and 'rounding down'!

Hope the people will not get ripped of yet again.

Petrol of RM1.92 to be rounded up to RM1.90? I dont think so. Instead, it will be rounded up to RM1.95 !! We may need the money to buy the Soyuz or send another person to space, remember. Without 1 cents, every retailer and seller will go for the higher round up, making things more expensive, afterall - every cent counts!!

What happens to our new comrade antubiul?

What have you done to her/him/himher?

Don't tell me you have really sailed away with him/her/herhim to the Sunset Boulevard? It was only a joke, for crying out loud! There is no such a place except in Imperialist Americana, as proclaimed & detested by the son-in-law!

BTW, now Dua Sen Smith is the new legar tender coin. Wow, no need to go to mycen news for the latest anymore!

Goodness Rocky, when will some of your readers/posters ever learn!!!

Another case of not seeing the wood for the trees!? And all you get thus far were on the difference of few sens, or on the rounding up figures.

READ and DIGEST Rocky's last sentence on "That's what they called a lull before the storm!" and if need be, start chanting it before you go to sleep till THE BIG announcement coming in after the next GE!

Ssshhh! No wonder they are making fun of us bloggers/commentators.

So BATA cannot sell their shoes at RM XX.99 anymore....wow! it will cost us extra 1 more cent. Susah lo

Will my collection of 1 cent coint still laku or I have to wait for 2057 so that I can sell it to those coin collecters.

In theory, it works on paper accounting i.e. no more and no less.

For practical purposes, when you're dealing with cash payments and collections, this will become an invisible inflationary factor.

And somebody will definitely 'cash' in on this anomaly.

Even the government, if you consider sales tax and what not.

Anybody started a copper recycling business yet? New source of income, right.

Rocky, they cannot do away with the one sen coin. It is part of our currency and a very important one. Without that one sen, you could not makes accouting right. The US and all other countries still maintained the one cent for accounting purposes. Thanks.

As per usual, the same dumb argument points put forth by our new comrades:

“”Another case of not seeing the wood for the trees!? And all you get thus far were on the difference of few sens, or on the rounding up figures””

So, what is the big picture you want us to see? All we can see is inflation! And we are not talking about one item of purchase in a month here, we wish it could be! So, where is the wood, and where is the tree? State your case.

What is it all about then? State your case and wake us up!

“”Ssshhh! No wonder they are making fun of us bloggers/commentators”’

Whoa, touchy fellows here, are we? That’s it folks, no more jokes to while our fun away! It’s serious time from now on.

But please state case(s), though!

after sometime the smallest value for our RM will start from 100 ..all price tag will begin from 10,000 onwards to millions like rupiah..the Indonesians might be having better live compared to us then and start to laugh at us..hahaha..Malaysia boleh?! Boleh hidup kalian semua??

"Brown Envelope said...
Wake-up guys, from your slumber! This isn't about making it to the nearest RM1.95 or RM1.90.
READ and DIGEST Rocky's last sentence on "That's what they called a lull before the storm!" and if need be, start chanting it before you go to sleep till THE BIG announcement coming in after the next GE!
Ssshhh! No wonder they are making fun of us bloggers/commentators."

Brown envelope, messages by Rocky are being read loud and clear. Agreed that this could a lull before the storm. But again, things being what they are, we like to look at it as an opportunity by the gomen/bussinessman to prepare us for the slaughter. The Malay said. "lulus jarum lulus kelindan" They conditioned our mind first by rounding up, not down. Naik sikit sikit first. After that, they will do with the real price increase. Just my 5 cents worth man.

This is bright idea, like the bright idea from Zimbabwe Mugabe go print money freely until the country enter superinflation - 4000% inflation rates.

And lots of KLSE counter is buy sell at RM X.XX level, e.g. RM1.22, RM2.66. And the bank overnight interest also base on decimal.

Must be umno idea since most of them just though of hypermarket shopping.

Invisible inflation mechanics will undoubtedly screw the common man. On the other hand if the government pushes for electronic payments system it may be a catalyst for some form of growth. Than again unscrupulous satans will surely cash in and the common man will just wilt and get washed away into the gutter.


KUALA LUMPUR, Nov 13 (Bernama) -- The government will phase out the one sen coins for the over-the-counter (OTC) payments to cut handling costs and effect greater convenience via a rounding mechanism from April 1, 2008.

Domestic Trade and Consumer Affairs Minister, Datuk Mohamed Shafie Apdal, said under the mechanism, OTC payments would be rounded up to the nearest multiple of five sen and it would apply to the total amount of a bill and not on individual items.

"The total amount of the bill that ends in one, two, six and seven sen will be rounded down and three, four, eight and nine sen will be rounded up to the nearest multiple of five sen," he told a press conference on the implementation of the rounding mechanism here Tuesday.

"The one sen coins will continue to be legal tender but the total amount produced each year will be reduced," he said.

NZ did that too last year. They gave the ghost on their one and two cent coins.

Also, the 1 sen coin contain metal. Is the price of metal increased or what?

Err.guys don't get too excited. If you buy only one litre of petrol, yes, by right you only have to pay RM1.90. But how many of us buy only one litre? Most of us who drives pump RM50 worth each time. The listed price is still RM1.92,you still pump in 26.0147 litre. So where got difference?

Doing away with one sen coin doesn't mean you cannot list your price such as RM4.56 or RM9.99. It's just that there is no one sen coin to transact with.

I hope Malaysians will not do away with the third world mentality. This will work out well if everyone does it rightly. Rounding the numbers mean there are price rounded down or up depending on the price.

Afterall, Australians have no problem practising it.

initially, the purpose to demolish one cent is all about the cost.
My wife, which is a bank negara staff, told me that Royal Mint (factory producing one cent) is producing the one cent coin with the cost of nearly one ringgit.
bank negara does'nt want to loose so much money anymore. so the best way is to demolish. tutup cerita.