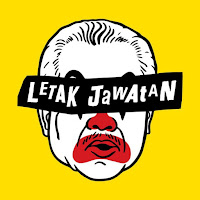 "If I resign, my whole Government resigns." - PM Muhyiddin aka Mahiaddin Yasin, Friday the 13th

Kuala Lumpur, 14 Aug: Muhyiddin Yasin's script writers must have meant it to sound like a huge threat: if the PM resigns, his whole Cabinet will go with him and this nation will then be plunged into pitch darkness. Unfortunately (for Muhyiddin), most Malaysians, judging from the response we've seen in the media, see it as the light at the end of the tunnel. The answer to their prayers for better things. "Please resign ... and allow democracy to heal in Malaysia," says scientist Dr Noraishah Abd Aziz on twitter.  Muhyiddin's resignation will put an end to the unprecedented face-off between the PM and the Yang DiPertuan Agong. It would be "the noblest thing" Muhyiddin could do, says senjakala @YunusZolkefle in response to a question I posed on my latest tweet.

With the exception of a few like Tony Pua, our learned netizens view the PM's address yesterday not suspicion but with contempt. They saw an attempt to stay in power, by hook or by crook. Within the Palace, there's a view that yesterday's address was a blatant attempt by a PM who had lost his majority to keep power by trying to bribe MPs to go against the King.

Muhyiddin's detractors have been having a field day, thanks to his scrip t writers' gaffe. "Daylight bribery," screams TPJ, a former ADUN, on his Instagram. Opposition leader Anwar Ibrahim says yesterday's speech was a confession that Muhyiddin's government has lost majority legislative support and is, therefore, obliged to resign. Former PM Najib Razak calls for calm, for the people to allow the King to do his thing when Muhyiddin goes to the Palace on Monday for an audience with him.

And that's exactly what we should do. Stay calm because our prayers are about to be answered. And please, the Government won't just vanish if the Prime Minister resigns. That never happens. For the script writers to make Muhyiddin go on record to say that it would just shows how failed they all are.

Read: Muhyiddin to meet Agong on Monday - Malaysiakini///Anyone but you, Abah by Terence Fernandez