Will the PM throw in the towel tomorrow (please)?

The Prime Minister is under siege from its ever-sulking partners Umno and with his support having dwindled to 110 MPs (and dropping), Muhyiddin Yasin can no longer claim he has the support of the majority. In which case, yes, he must get an audience with the King and declare so. Call for a general election or leave it to the King, but resign he must. Read Remember your oath to defend the Constitution? Time to seek audience with Agong, PKR MP tells Muhyddin after losing majority support..

But the people won't want to go back to the polls, that I am sure of. The voters had given their mandate in 2018 and that mandate doesn't officially expire until 2023. We've seen what happened after those Sabahan politicians forced their people to go out and vote for them again last September to settle their dispute. We have had to live with the second and third waves of the coronavirus infections primarily because of that decision. We don't want to go down that road again.

So if Muhyiddin does the right - and demoractic - thing and resign, in the King we trust. We'll have to.

But like my friend YB Hwa Beng just said on his Twitter, the PM won't resign lah. They won't let him. Instead, tomorrow he will go on and make that special and urgent announcement on Covid-19 that we were told about last Friday as if what he says, when he chooses to say it, will make things better. Abang Din may or may not lock us down, but he will try to do his utmost so that he and them will stay in power. That's one thing they've done very, very well. 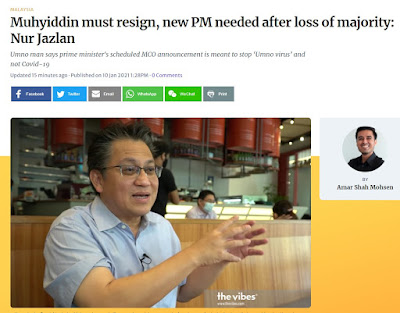 KUALA LUMPUR – Pressure continues to mount on Tan Sri Muhyiddin Yassin on the eve of his major announcement on a rumoured lockdown, with Umno leader Datuk Nur Jazlan Mohamed calling for an alternative prime minister to be identified immediately.

Saying that the movement control order (MCO) expected to be announced tomorrow is to curb the "Umno virus" and not the novel coronavirus,  Nur Jazlan said Muhyiddin's resignation is inevitable.

This follows Muhyiddin’s loss of a parliamentary majority, which the Pulai Umno division chief said necessitates his resignation.

The son of the late Umno stalwart Tan Sri Mohamed Rahmat, Nur Jazlan said, only if a new prime minister cannot be found must a fresh election be called, something that Umno has been pushing for as its relationship with Bersatu reaches its tipping point.

His statement comes after Umno’s Machang MP Datuk Ahmad Jazlan Yaakob withdrew his support for the Perikatan Nasional (PN) government yesterday, effectively causing Muhyiddin to be on the brink of losing his majority.

“Isn’t it in the constitution, the very basis of our parliamentary democracy, that the prime minister must enjoy the support of the majority of MPs? As evident now, he doesn’t, so he has to resign.

“The next step would be to look for an alternative (prime minister). If this can’t be achieved, because no one individual commands majority support, then we have to go for an election,” he told The Vibes today.