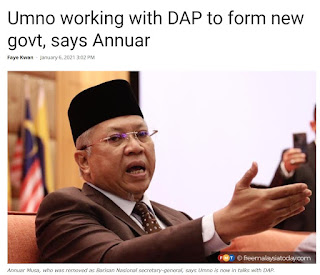 TTDI, Jan 7: After his removal from BN as its powerful secretary-general, Annuar Musa has been spewing all kinds of verbal toxins at his own party and, especially, at Umno president Ahmad Zahid Hamidi. Which is kind of sad because the Ketereh MP has jsut exposed himself as just another political ingrate in the long list of ingrates.

Even an Umno outsider knows it was Zahid who brought Annuar back from the political cold to test his mettle against Tok Mat Hassan for the Umno deputy president post during the party's elections in 2018. As it turned out, Annuar was nowhere near Tok Mat's level but, still, Zahid gave him a post after his defeat, made him politically relevant again, and later even consented to his becoming a Cabinet minister in the present Muhyiddin administration.

Annuar Musa's journey from the cold to becoming the 'spokesman' for Muhyiddin's Bersatu (instead of his own party and president) was rather unexpected, at first. But in his own words. Annuar has always fancied himself "a Mahathir man" and said it proudly to all and sundry even after the former Umno president and Prime Minister had burnt the bridges. As FT Minister, I rank him higher than his predecessor Khalid Samad but that's not a benchmark anyone should be too proud of.

I tweeted a couple of days ago that I was not surprised they had removed Annuar. One day about a month ago, the hugely popular Tok Mat had come into Zahid's room at PWTC, the party's headquarters, and blurted out, unfortunately in front of two senior journalists and a big blogger known to both men:

"You should have sacked him already."

This was after Annuar had made yet another disparaging statement about Umno, as if he wasn't part of the party at all! But Zahid didn't sack him then. They continued to give Annuar enough rope for him to hang himself.