By remaining seated, Anwar Ibrahim stood up as the Opposition leader on Thursday

Latest: The Opposition leader talks to The Vibes 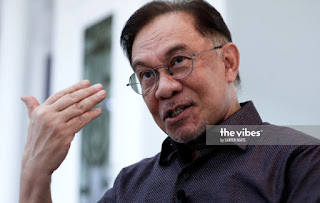 “A week earlier, I issued a statement. If our concessions are not met, we will opt to reject Budget 2021 in total. What happened (on Thursday) was that the finance minister made major concessions.” - Anwar: Government conceded to Opposition demands, thevibes.com 29 Nov 2020

Bangsar, 28 Nov: I haven't agreed with Anwar Ibrahim in ages. But I’m inclined to agree with the Opposition Leader’s decision last Thursday to not shoot down the Budget 2021.

Anwar had instructed Opposition MPs to not bloc vote against the Budget and all but 13 did  as told. The 13 - a dozen of Mahathir-Mat Sabu's men and a lone PKR MP who claimed he did not get the memo - stood up to demand a bloc vote. But 15 were needed and because the Opposition was two MPs short, the Budget was passed ‘at policy level’.

Over tea yesterday, the pro-Umno blogger Big Dog asked me how I would interpret Anwar's action. I said, more or less:
Firstly, it shows that Anwar has the confidence of the majority of the Opposition MPs. Even the DAP, which was so enamoured of Mahathir after Lim Guan Eng was made Finance Minister (short lived, alas), had stood (or, rather, sat) solidly behind Anwar. Not Mahathir.
Secondly, Anwar decided to let Tunku Zafrul's Budget live on after the Finance Minister had granted last-minute concessions that fulfilled not just Pakatan Harapan's demands but also those of Umno's. One MP told me there were so many concessions it was as if Zafrul had tabled a totally different Budget from the original one. What does this show? It means there is actually still hope that this government can be schooled to give more to people who need, like extend the moratorium till March. Because the Budget survived Thursday, MPs will now discuss it at committee level from this week until the crucial 3rd reading on Dec 15.

Thirdly, it shows that Anwar is loyal to the King. Unlike the 13. 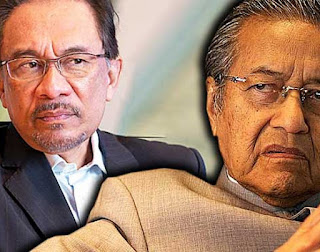 Finally, and Anwar may not admit it, I think he aimed to rile Tun Mahathir. And the Old Man was absolutely peeved, said the Opposition leader's ‘maneuvering’ was a sell-out and akin to legitimizing Muhyiddin's 'backdoor' government. He was also terribly annoyed because Anwar's move had exposed him for the very negligible support that he commanded.  Amanah president Mat Sabu’s statement earlier today -   Stand firm behind Anwar, PH, says Mat Sabu - means Mahathir may have zilch.