But would DAP want Mahathir as a member?

Updated: "To quote Stephen King, 'To fool me once, shame on you. Fool me twice, shame on me. Fool me three times, shame on both of us.'" '- Time to move beyond Dr Mahathir by Terence Fernandez/The Star

Puchong, 28 May: Muhyiddin Yassin's move to sack his own party's founding chairman is nothing short of sensational. The only other time this was done to Dr Mahathir Mohamad was in 1969 when Tunku Abdul Rahman, then the PM and Umno president, kicked him out of the party. But 51 years ago Mahathir was relatively a nobody. He wasn't even a Member of Parliament, having lost in the general election of that year. Today, the year of his own Wawasan 2020, Dr Mahathir is not just the country's only two-time Prime Minister or the oldest man in the world to ever be a PM of a free country, the Old Man has the media, billions, and the DAP solidly behind him. To sack such a man - who clearly wants to be our PM for the third time - must take more than just courage; perhaps even a death wish.

But sacked him Muhyiddin did!

One's immediate concern now is the fact that the Tun is without a party. He can try and form a new party. There would still be a lot of followers as Dr Mahathir at 95 is still a big draw for young and old, Malays and non-Malays alike.

But to form a new party takes time.

A better idea, one political observer mentioned to me, in jest or otherwise I couldn't tell, is for Mahathir to join one of his old partners in Pakatan Harapan. Preferably the DAP.  No, forget PKR and Warisan. It must be DAP. After all, the Old Man has nothing but good things to say about the DAP these days.

Now, just imagine if the Old Man decides to join DAP. That would be far, far more sensational than his sacking today. 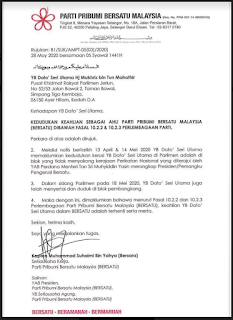