RM6 billion of cigarette revenues up in smoke (and the government does nothing?)

"The reality is that Malaysia is in the grips of corruption and many institutions are failing and this is leading to a huge problem with illegal cigarettes and illegal alcohol." - Cormac O'Rourke, managing director JTI International Malaysia 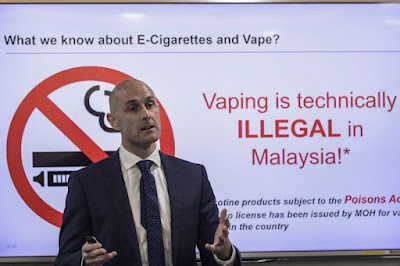 His employers, JTI International, Japan's largest tobacco company, has been at the receiving end of syndicates who have made Malaysia the haven for contraband cigarette (see the Malay Mail's report Illegal smokes, vape could cost Treasury RM6 billion annually, says tobacco maker). JTI's profits are falling and O'Rourke may have to forgo his fat bonuses this year.

But JTI isn't the only victim of these syndicates. The other tobacco players have been hurt, too. The difference is, they don' trash the authorities and officials. They have continued to lobby the government for greater enforcement to fight the syndicates while pursuing for greater awareness among the people about the enormity of the illicit cigarette trade. They even encourage people to switch from cigarettes to alternatives, such as those heat-not-burn cigarettes, while lobbying governments - including our government - to regulate the e-cig business and declare these alternatives as less dangerous than traditional cigarettes.

None have been so callous as to call their host country corrupt!

"Why is the (Malaysian) government not acting?" O'Rourke demanded publicly last week. "In the cigarette industry alone, they are losing RM5 billion annually and yet we haven't seen any sort of proper enforcement action taken."

I'm not trying to defend our Customs or Immigration people, or the Malaysian Anti-Corruption Commission (MACC) and the other authorities involved, but I just don't think that statement by O'Rourke is a fair one at all.

But "failing institutions", where does that come from? What have you been smoking, MR O'Rourke?

I heard the interview on air. It was even more aggressive than how you described it. He accused our ministers of being inexperienced and was telling LGE what he should be doing for Budget 2020. This is still a British colony kah?

This O’Rourke fella thinks he can talk like that because he thinks we are a small country. He wouldn’t dare be so arrogant if this is India or China.

This O’Rourke fella thinks he can talk like that because he thinks we are a small country. He wouldn’t dare be so arrogant if this is India or China.

We’re so close to Merdeka di. He thinks 1957 hasn’t happened yet. Mat Salleh showing off his superiority complex. He should go home.

I read he even threatened to reduce his company’s investments if the gomen doesn’t do anything. Podahlah. He thinks we’re beggars izzit?