The passing of a Malaysian icon in London 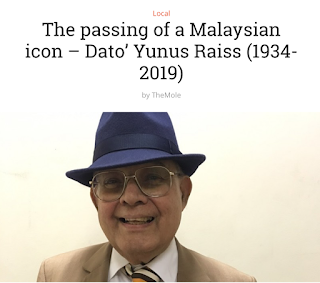 Puchong, 13 Aug: Ashraf Abdullah wrote on his FB a wonderful piece in memory of Dato Yunus, who passed away peacefully on Hari Raya Haji at the age of 85. The article was picked up by several media outlets in Malaysia, including The Mole. The passing of a Malaysian icon, indeed. Like Ashraf, I got to know Dato Yunus when I was the NST Correspondent in London in 1992-93. Haliza Hashim, the former TV3 journalist who has made the UK her base for over 25 years now, has had the privilege of being closer to the man, and remembers him in her Instagram: "... a distinguished man among the Malaysian and British community in London, a respected educationist, extremely learned, a fantastic storyteller, a great teacher, and a mentor to many of us. Anyone who knew him would agree that he is ever so generous, a real gentleman, dressed well, and incredibly cultured."
I also remember Dato Yunus and I talking cock - about how a scar on his face - and mine -  would have served us well. Because we looked a little too pretty, he said. A small scar just above an eyebrow would make me look more macho. Maybe even more desirable to the ladies! I can't remember why we were talking about scars that day but that's Dato Yunus, never a dull moment.
Alfatehah.